One of the paramount concerns regarding Mac OS X Lion has been how to restore from disk failure, as Lion lacks any physical install medium. As it turns out, however, Apple has an answer for that, and they call it Internet Recovery. 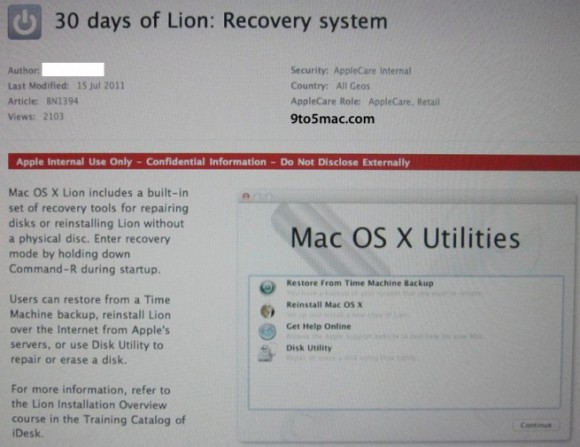 As we’ve known for some time, Lion contains a restore partition (which we have known about since February) that can allow you to restore or re-install OS X without a physical install medium. This can be accessed by holding down Command-R during startup, which will force your Mac to boot from the recovery partition rather than your main install.

What’s new and fascinating, however, is that Lion Recovery, which Apple introduced today as part of their Lion distribution, now allows you to restore your Mac after even a catastrophic hardware failure. Whether you have a working hard drive installed or not, Lion’s new Internet Recovery feature (built into all new Macs) can now download and start Lion Recovery over any available broadband internet connection.

The new feature is said to be hardware-dependent, with the new Mac Mini and MacBook Air being the first machines that are enabled for the new feature, but so far there aren’t many details available on the feature or how it works, although Apple has posted a new OS X Recovery page on their site.

The combination of Lion Recovery and Internet Recovery appear to have just officially made physical install media an obsolete technology, so long as you have a fast broadband connection. Couple this with the fact that the new Mac Minis now ship without optical drives of any kind, and it appears that the Broadband Revolution is upon us, and Steve Jobs is the General leading the attack on optical discs and physical media.