An executive for China Unicom appears to have confirmed that Apple’s upcoming iPhone 5 will support fast 21Mbps HSPA+ data technology, reports Macotakara, which many are marketing as a “4G” mobile data standard. 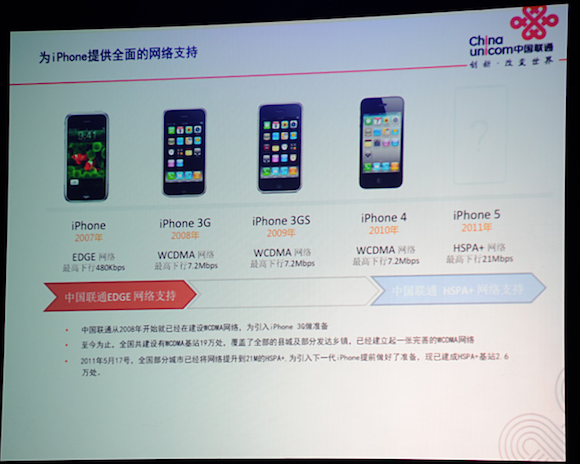 The image above was taken during a presentation by China Unicom Research VP Huan Wenilang at Macworld Asia 2007. Considering that China Unicom is Apple’s exclusive carrier partner for China, they may reasonably have access to such information.

While there is some room for debate regarding whether HSPA+ should actually be called a 4G standard, if Wenilang’s information is accurate, this is still excellent news. HSPA+ is significantly faster than the 7.2Mbps HSDPA standard that the iPhone 4 currently supports, nearly tripling possible data speeds in theory.

To add further credibility to this report, current radio chips found in the Verizon iPhone 4 (Qualcomm Gobi MDM6600) support HSPA+ speeds of up to 14.4Mbps, so adding support for the faster 21Mbps standard is a natural move. AT&T is already well into upgrading their U.S. data network to support the new faster 3G standard.

Prior rumors have suggested that Apple has already been testing LTE-capable iPhone hardware, although analysts don’t expect Apple to implement LTE 4G support in the iPhone until 2012, as the current LTE chips are too power-intensive, and new chips aren’t due until early 2012.

Apple is expected to announce their next-gen iPhone at a media event on October 4th, alongside iOS 5, iTunes 10.5 and iCloud.