An as yet unknown Apple wireless device passed through the FCC this month, and it doesn’t seem to jibe with any known Apple products. There’s a possibility the mysterious device could be the Amazon Echo competitor we report on earlier today. 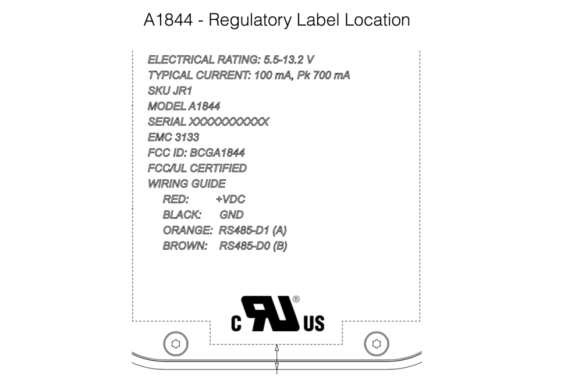 Referred to in the filings as simply a wireless device with model number A1844, what we do know is that the product includes Bluetooth and NFC functionality.

Illustrations that are accessible show the regulatory label, and below it, two torx screws. The illustration seems to indicate the device is rather small, but the exact dimensions of the device aren’t shown.

Apple is being its usual mysterious self, as the FCC filing includes the usual permanent confidentiality request that blocks documents from being released that show block diagrams, electrical schematic diagrams, technical descriptions, antenna gain and antenna locations.

Earlier today, we reported that Apple was going forward with the development of a much-rumored product that will offer a Siri-powered Amazon Echo competitor. It is possible the device in question here is just that. Or, it could be a new AirPort Extreme router, or an updated ATV set top box, or an accessory for use with Apple Pay, or… That’s what makes reports like this fun! We’ll keep you posted. What do you think it might be?