Let’s face it, iPads are everywhere, and getting into more places all the time, Now it looks as if they may be in the cockpit of your next flight. Alaska Airlines has just become the first major US airline to use the iPad to replace paper flight manuals for pilots. 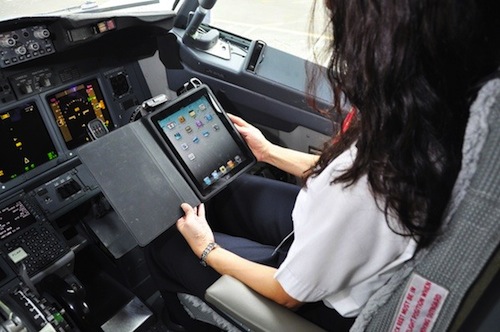 Whole they’re not quite ready to entirely ditch paper navigation charts yet (though it is being considered), they will be replacing flight manuals – a good start, to say the least. The iPads will be preloaded with the GoodReader app, as well as PDF’s of 41 different manuals and other materials.

According to the airline, this change could save them about 2.4 million sheets of paper, and the cost of the project can be completely offset by fuel savings from the reduced weight of not having to carry all that paper. Additional savings are also expected from fewer back and muscle injuries caused by pilots carrying around heavy flight bags, which could weight up to 50 pounds.