There has been some recent talk about the possibility of Apple using custom chips for future portable products. The latest rumor is that Apple is actually lab testing an A5-powered MacBook Air. What could this mean? Read on for our discussion of the matter. 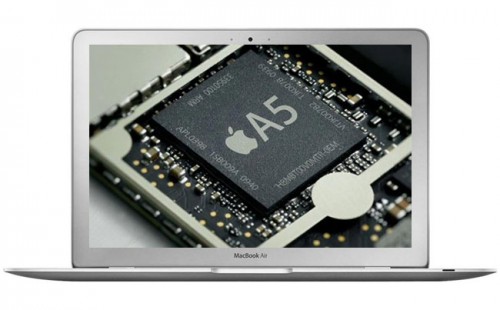 Japanese blog Macotakara, which previously outlined some iPad 2 features accurately, is the source of the report, claiming that an A5-powered MacBook Air with Thunderbolt I/O technology is being tested internally in Apple’s product labs, and is possibly being built by Quanta Computer.

The article quotes a source who allegedly actually saw this test device in person, the machine performed better than expected, though it’s not clear whether OS X or iOS was installed on the machine (we’d place our bets on OS X). Despite the fact that this is merely a rumor, and that Macotakara’s historical accuracy is not exactly spotless, it nevertheless raises some interesting questions.

Apple currently uses the custom A5 chip to power the iPad 2, and will likely be adapting this chip, or a similar one, for use in future iPhones, Apple TVs and iPod Touches, with the chief benefits being portability, power savings, and decreased space usage inside an electronic device. If the rumors are true, and Apple is considering using a custom System-On-A-Chip (SOC) in the MacBook Air, what could this mean for the product line in the future?

The Summary (Or Reader’s Digest Version)

In short, (in case you don’t want to read this whole thing), here are the points that we will discuss.

If Apple decided to embrace an SOC:

One of the most obvious implications would be a thinner, lighter MacBook Air with even better battery life. By using a SOC, Apple would be combining the processor, graphics chipset and memory, RAM, and memory controller all onto a single chip. This would definately help with power consumption, as there is, quite simply, less hardware to power. Add to that that ARM processors have lower power consumption to begin with, and this could definately become a significant factor.

Secondly, the move to an SOC in the MacBook Air could help Apple to create even thinner and lighter designs, as the chip provides considerable space savings over using separate components.

In addition, if Apple worked closely with Intel on such a chip (which could be plausible, considering that Intel has openly stated that it would be welcome to developing custom silicon for Apple), Intel could bring its assets to the table, and design a chip using their new 3D transistor technology (which notable improves performance and power consumption) that could essential marry Intel’s X86 platform with ARM-based processing cores. This could result in a chip that could still run code designed for current processors, as well as code for ARM processors (such as iOS and its array of Apps). It could possibly result in universal apps becoming available that work not only on iOS, but on a Mac as well, as it would simplify development of apps that work with both iOS and OS X.

If the rumors are true, and Apple is indeed considering taking this rode, this could lead to a greater transitioning and bringing-together of iOs with the current desktop platform, OS X. It seems as though Apple is already working to bridge this gap, particularly considering design decisions that Apple has made in Mac OS X Lion’s interface to make it more iOS-like.

It’s possible that Apple could transition all future portables, even the MacBook Pro, to use a powerful space and battery saving SOC, without significantly sacrificing either computing power or compatibility.

One downside to this, however, is that it would decrease a user’s ability to perform upgrades, as RAM becomes integrated onto the chip, which might leave MacBook Pro users (particularly power users) feeling somewhat betrayed.

While it’s entirely unclear to what level Apple may be pursuing these ideas (or at all, as the rumor may in fact be completely false), it certainly does provide some food for thought. Would this be a good thing for Apple in the long run? As always, we value your comments and ideas, so sound off in the comments!