In what might be the most awesome video I have seen in a long time, Ronen Verbit assembles a short film that plays back across three separate iPhone screens, which are expertly choreographed to show the entire effect of the film. Very, very cool. 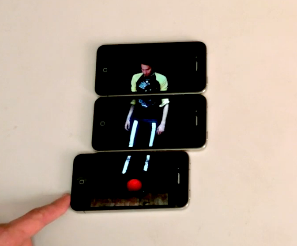 The movement of the iPhone is what intrigues me the most – the moving around of the iPhones in order to track the “movement” of the ball and the physical orientation of the poor man trapped inside his digital world. The movie manages to show both vertical and horizontal movement throughout its impressive display. Check out the embedded clip below to see it all.

Ronen’s Adventure in an iPhone from Ronen V on Vimeo.