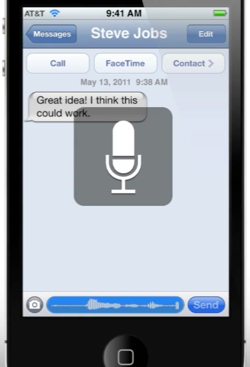 There has been a fair amount of buzz lately that the next major release of iOS will include voice recognition capabilities. Jan-Michael Cart has taken those rumors a step further by creating a conceptual video of how Apple might implement it.

The video shows how voice commands could be activated on the iPhone by holding the home button. Cart also suggests the feature would be available to any other application by pressing down momentarily in the text area, tapping a mic icon and dictating for on the fly speech-to-text capabilities.

The user experience Jan-Michael has created seems very Apple-esque and certainly excites the imagination for the possibilities of Apple’s partnership with Nuance and their voice recognition technology.