Perhaps the most ridiculous and expensive custom iPad ever seen by mortal eyes, this iPad 2 was conceived in the mind of British luxury designer Stuart Hughes, and contains 12.5 cts of “flawless” diamond, 53 gemstones, and a bit of solid 24ct gold – and that’s just on the Apple logo! 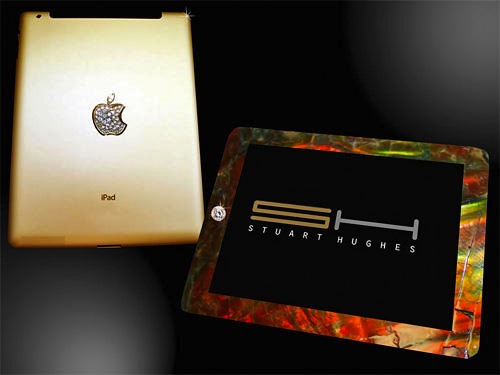 The iPad, which Hughes calls the “iPad 2 Gold History Edition” has a back panel fully decked out in over 2000 grams of solid 24ct gold, whereas the front bezel of the device is made from “the oldest rock the world has to offer” – 75 million-year-old Canadian Ammolite, as well as the thigh bone of a 65 million-year-old T-Rex. The home button is fashioned from an 8.5ct flawless diamond, which is inlaid in platinum and surrounded by 12 other diamonds.

Two of these ridiculous and overly-decorated iPad 2s have been made, and you can purchase it for just $8.1 million dollars. Nevermind the absurd notion of spending $8.1 million on a tablet that will be obsolete by this time next year when you could be saving orphans…anyone have a spare $8.1 million they wouldn’t mind sending my way?