A new report from ZDNet reveals that Apple has reached an all time high in customer satisfaction, topping their own prior record, and dominating the overall PC industry. The American Customer Satisfaction Index (ACSI) polled over 70,000 consumers regarding customer satisfaction, and awarded Apple 88 out of a possible 100 points. 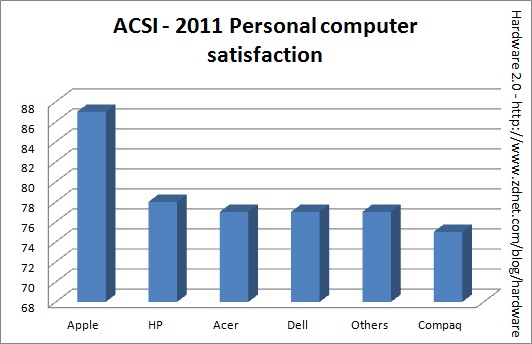 The ASCI report says the following about Apple:

In the eight years that Apple has led the PC industry in customer satisfaction, its stock price has increased by 2,300%. Apple’s winning combination of innovation and product diversification—including spinning off technologies into entirely new directions—has kept the company consistently at the leading edge.

There’s little doubt that this is one of several reasons that Apple is worth more as a company than any other (actually, by market cap they are the world’s most valuable company), and a strong factor in why Apple continues to grow and succeed while the overall industry remains stagnant.