Apple’s Online Store went down for maintenance last night, and has now returned with a few interesting changes. Apple has added a spiffy new iPad order page to the Online Store, and has also removed shipping times, replacing them with an “in stock” notifier. 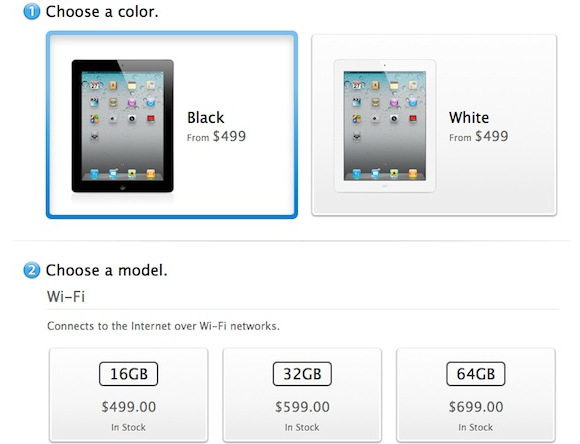 The new iPad order page looks great and is simple to use – it’s been rehashed to be easier to use from an iPad or iPhone, and has been given a much needed visual update. Ordering an iPad is now as simple as choosing a color, choosing a model, and if choosing a 3G model, choosing a carrier. It’s definitely much simpler than the previous iPad order page.

The more notable change, however, is Apple’s removal of expected shipping times from the online store. Instead of being told that an item will ship within 24 hours, or 1-3 days, product pages now simply show “In Stock,” and presumably “Out of stock,” although since no items are currently out of stock, this remains to be seen. Items with delays longer than “1-3 days” still appear to display an estimated shipping time.