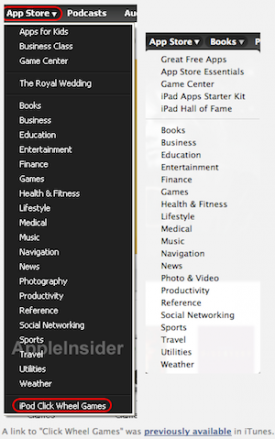 While many have suspected that the iPod Classic’s days are numbered, a new report from AppleInsider provides yet another nail in the coffin: Apple has removed support for iPod click wheel games from the iTunes Store. A link to the Click Wheel Games category was formerly listed in the App Store’s drop down menu, but has now been removed.

Apple briefly experimented with the idea of apps before iOS ever came around by releasing a number of click wheel-based games for the iPod Classic. The games were mostly classics or popular puzzlers, such as Sonic The Hedgehog, Bejeweled, and a remake of Pole Position.

Apple’s click wheel games were never especially popular, however their apparent removal from the iTunes Store is notable, as it suggests that Apple may be cleaning up after the iPod Classic prior to discontinuing the device.