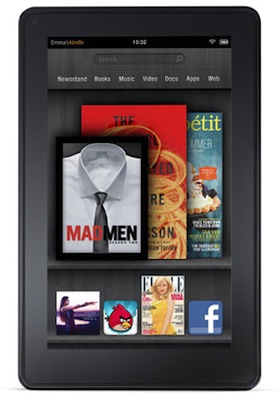 Amazon yesterday introduced the World to what is probably the most likely “iPad Killer” on the market to date. The Kindle Fire is a $199, 7″ full color display, dual core processor tablet, it weighs just 14.6 ounces, has 17 million+ songs, 100,000 movies & TV shows, books magazines galore, and thousands upon thousands of apps.

Check out the teaser trailer below and the drop below watch to watch Amazon CEO Jeff Bezos introduce the Fire at the Amazon Press Conference.

You can order The Kindle Fire for $199 from Amazon.com.

The Kindle Fire looks very nice and has an amazing price tag. Of all the rivals to Apple, Amazon is by far the best equipped to challenge their dominance in the tablet market. Amazon know how to do cloud computing, they have access to millions of songs, videos, and books. And on top of that with millions of visitors a day; Amazon.com is the perfect marketplace to promote the Kindle Fire.

It is rumored that Apple may introduce us to the iPad 3 as early as January 2012.

Things just got a whole lot more interesting in the tablet sphere. Exciting times ahead.