Best Buy, known for its Apple-related deals, had pulled another great one out of the bag, offering an 8GB iPhone 4 for $49.99 with new two year service contract. And with the normal price at $99.99, it’s easy to see why this is such a bargain. 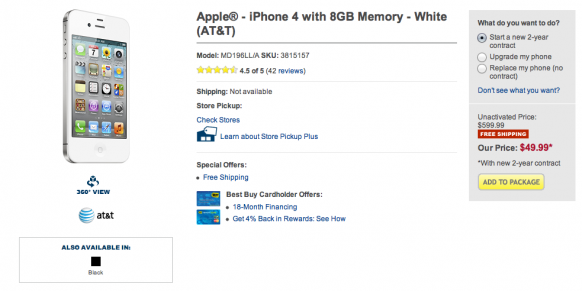 The deal, which appears to be permanent or at least until the unveiling of the next iPhone, includes both white and black models. It is also AT&T exclusive, which could be problematic for some, even it is also available as an upgrade to a current phone.

I would definitely investigate this further if I lived in the US, as it significantly undercuts Apple’s pricing, however you might want to be careful about buying something that cannot take advantage fully of the new features on iOS 6. Nevertheless, it’s a cheap way to get into the iPhone universe, so for some, it could be perfect.