A new forecast by NPD DisplaySearch says shipments of touchscreen tablets will surpass traditional notebooks by 2016, and the Apple iPad will lead the way. 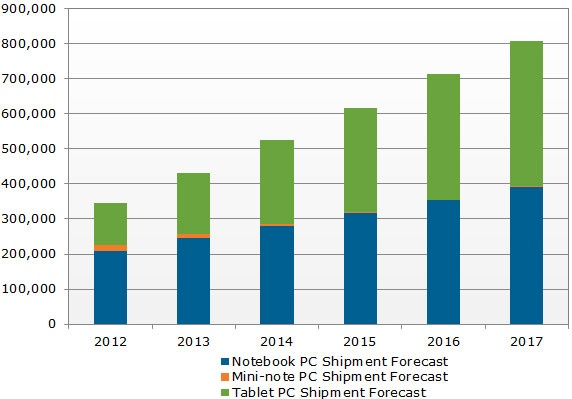 The prediction was issued by NPD DisplaySearch on Tuesday, which used the generic term “tablets” in its forecast but singled out Apple’s iPad in an accompanying press release. Apple currently dominates the tablet market, and is expected to account for more than 60 percent of all tablets shipped in 2012, with an even higher share of actual sales to customers.

NPD doesn’t offer a breakdown of how much of the tablet market it expects the iPad to control by 2016, but it expects that tablet shipments will grow from 121 million units in 2012 to 416 million by 2017.

In the same five-year period, the projection calls for notebook shipments to increase from 208 million to 393 million.

“Consumer preference for mobile computing devices is shifting from notebook to tablet PCs, particularly in mature markets,” said Richard Shim, senior analyst at NPD DisplaySearch. “While the lines between tablet and notebook PCs are blurring, we expect mature markets to be the primary regions for tablet PC adoption. New entrants are tending to launch their initial products in mature markets. Services and infrastructure needed to create compelling new usage models are often better established in mature markets.”

Growth in tablet shipments is expected to be driven by “mature markets,” where they are expected to reach 80 million units in 2012, and 254 million by 2017.

NPD expects tablets to continue to evolve and become more powerful. Allowing them to become a “compelling alternative to notebook PCs” for many customers, seeing shipments exceeding notebooks by 2016.

DisplaySearch issued a prediction in May saying that it forecasts Apple’s share of the tablet market to dip to 50.9 percent by 2017, with the iPad taking just over half of 424.9 million units shipped five years from now.