The folks at iFixit have maintained their faultless teardown record, getting their hands on the new 21.5 inch iMac. However the bad news is that, rather predictably, they uncovered an upgrade nightmare, making it impossible for the average person to bump up their hardware. 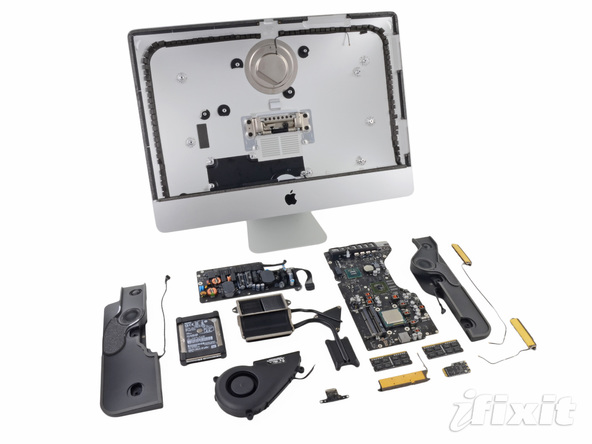 For starters, to remove the screen, you need more than suction cups. Unlike the previous edition, Apple has taken the extra measure of glueing the screen down, so unless you’ve got a heat gun, you’re not getting into it.

But it gets worse. By removing the screen, you rip all the foam adhesive, meaning you’ve got tediously replace all of it with double sided tape once you’re done.

But it gets worse, again. Forget about installing more than one hard drive. That is, unless you want to bust out the soldering iron. There is only one bay, and unless you want to solder your own in, two HDDs is a no no, so this is the ultimate reminder to make a wise choice when you first get your Mac, even if it means spending that little bit more.

It couldn’t get any worse could it? Boy, it can. As if to add insult to injury, all the ‘easily replaceable components’ like RAM are on the other side of the logic board. So you have to unscrew the logic board to access them after disassembling all of your iMac, and at that stage, it really isn’t worth it. Easily replaceable? Not anymore.

Surely, that’s the end of the problems? Wrong! If your screen gets cracked, or your LCD develops dead pixels, you will have to replace both, because they’re fused together. Of course, at a much higher cost. It reflects some of the points in our editor Glenn’s recent post: The High Cost of ‘Innovation’.

All that’s illustrated with the mark iFixit gave it. 3/10. For a desktop, that’s pretty dismal, especially considering the previous generation had a very respectable 7/10.

There is one positive that this teardown revealed though. Just how much engineering skill and thought has been put into the design. From the new vents on the back, to the way all the components fit onto the motherboard, it’s a nightmare for geeks but it’s a marvel for designers and engineers.

You can check out the full teardown details here.