Apple has announced its fiscal year 2014 first quarter results. the company reported record quarterly revenue of $57.6 billion, landing in the range of its guidance for the quarter of $55 – $58 billion. Analyst estimates had averaged approximately $58.1 billion. It reported a net quarterly profit of $13.1 billion, or $14.50 per diluted share. For comparison, the numbers for the same quarter last year included revenue of $54.5 billion and a net profit of $13.1 billion. 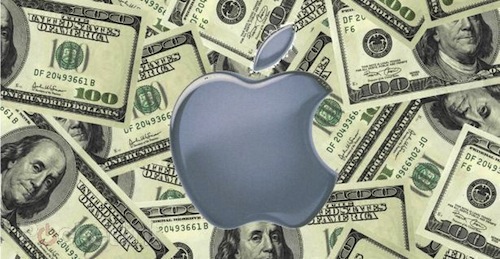 Today’s report is the first to include a full three-months of sales numbers for the Cupertino firm’s new iPhone 5s, 5c and revamped MacBooks.

Device sales break down as follows:

Apple’s News Release about the numbers:

Apple’s Board of Directors has declared a cash dividend of $3.05 per share of the Company’s common stock.  The dividend is payable on February 13, 2014, to shareholders of record as of the close of business on February 10, 2014.

“We are really happy with our record iPhone and iPad sales, the strong performance of our Mac products and the continued growth of iTunes, Software and Services,” said Tim Cook, Apple’s CEO. “We love having the most satisfied, loyal and engaged customers, and are continuing to invest heavily in our future to make their experiences with our products and services even better.”

“We generated $22.7 billion in cash flow from operations and returned an additional $7.7 billion in cash to shareholders through dividends and share repurchases during the December quarter, bringing cumulative payments under our capital return program to over $43 billion,” said Peter Oppenheimer, Apple’s CFO.

Apple is providing the following guidance for its fiscal 2014 second quarter:

Apple will provide live streaming of its Q1 2014 financial results conference call beginning at 2:00 p.m. PST on January 27, 2014 at www.apple.com/quicktime/qtv/earningsq114. This webcast will also be available for replay for approximately two weeks thereafter.