The ABC television network has rebranded its Watch ABC app for iOS and Apple TV device to simply ABC. The new app now offers a redesigned interface, new, exclusive digital series, and an ABC Throwback area where users can watch ABC series from past seasons. 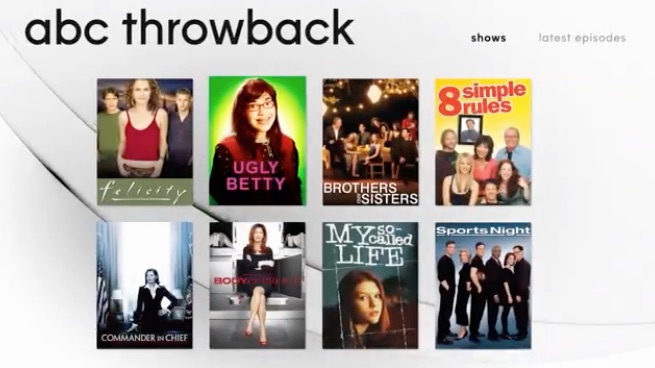 ABC Throwback shows include such “classic” (read that as “cancelled”) fare as Schoolhouse Rock, Ellen, Ugly Betty, Dinosaurs, My So Called Life, and more. The app allows users to view the throwback episodes without the need to provide proof of a TV subscription.

“Our team has completely re-imagined the digital viewing experience for ABC fans,” said Karin Gilford, ABC’s senior vice president of digital media, in a statement. “In addition to the current ABC shows that fans know and love, we are introducing new ABC original digital series that are fun, fresh and perfect for mobile, and we are making full seasons of all-time favorite shows available for binging.”

MacRumors notes the ABC app will continue to offer brand-new episodes of the latest shows running on the network, offering such fare as Marvel’s Agents of S.H.I.E.L.D., The Middle, Blackish, and more. Users can also stream live TV while in the app.

The ABC app for iOS devices is free, and is available in the App Store. [GET IT HERE]