Nike on Tuesday posted a series of humorous ads promoting the Apple Watch Nike+. The videos star funny man Kevin Hart as “The Man Who Kept Running.” Hart is portrayed as a new Apple Watch owner who so loved the device – and it’s daily question, “Are we running today?” – that he began running, and couldn’t stop. 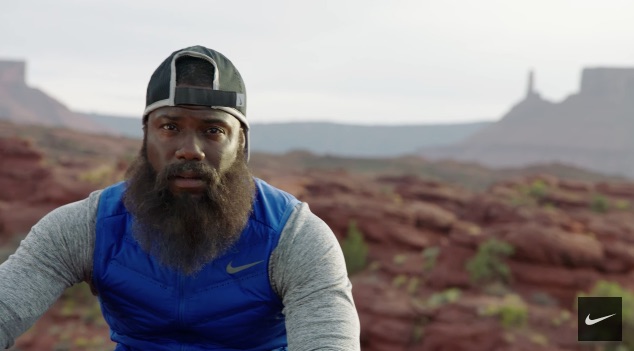 The first video shows Hart doing an unboxing video with his new Apple Watch Nike+ in October. An on-screen message then says he disappeared the next day. “Months later, a film crew found him in the desert 700 miles from home,” reads the text in the next screen. (Good thing that film crew just happened to be out in the desert, eh?)

Hart, now sporting unkempt hair and a long beard, is shown as he runs through the desert. In a voice over, he explains why he can’t stop running:

I’ve been living out here for months. But my spirit has been out here forever. See, running used to be hard for me, but then things changed when I woke up and started to hear this little voice in my head. It was the same question every day. “Are we running today?” Every day. You know what I started to do? I started answering that question. Yes! Yes! So now I run. I run.

Additional videos in the series show Hart talking to rocks in the desert, (which are “full of wisdom”), sharing his New Year’s resolution with a “friendly” buzzard who is apparently following him through the desert on his adventures, planning his trips, and planning his running around the weather. Hart is also shown competing with other runners via his Apple Watch Nike+, offering them virtual “fist bumps” when they perform well. (No word on how Kevin keeps his Apple Watch charged in the middle of the desert. Perhaps Tesla has an electric car charging station out there?).

The Apple Watch Nike+ is a Nike-branded special edition of the Apple Watch Series 2, designed to motivate users to run every day. It offers an aluminum casing, as well a special edition perforated band which Apple says reduces weight and improves ventilation. The device also includes exclusive Nike watch faces, and the Nike+ Run Club app.

The videos, seven in total, can all be viewed on Nike’s YouTube Channel.