It’s been rumored that Apple will launch a trio of new iPads in March, and seemingly supporting that rumor is the indication that supplies of the 12.9-inch iPad Pro appear to be drying up. 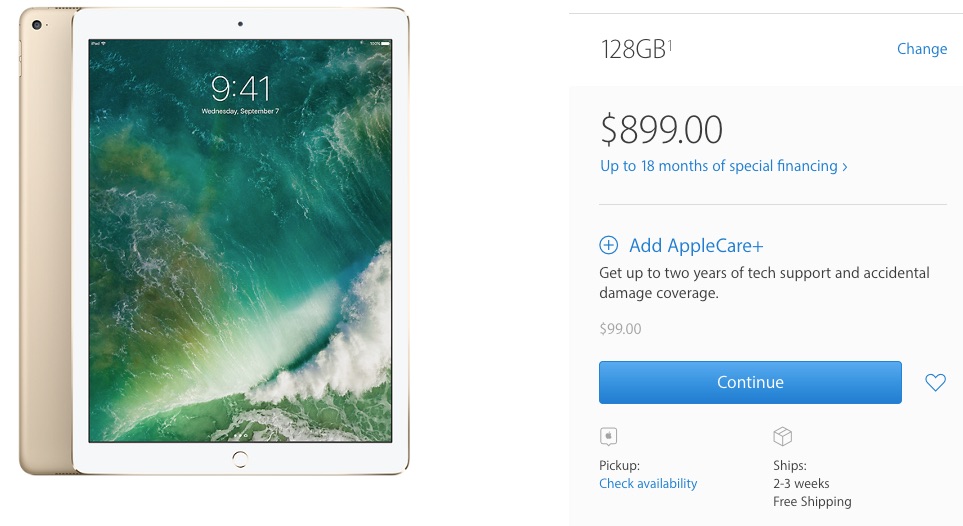 A spot check of Apple’s online store reveals that most if not all 12.9-inch iPad Pro models are now estimated to ship in 2-3 weeks in the United States, Australia, Canada, France, Germany, Japan, United Kingdom, and elsewhere—that’s up from a shipping estimate of 1-2 weeks as recently as last weekend.

A quick check with Apple’s in-store pickup availability tool shows the 12.9-inch iPad Pro is in short supply, with a number of locations showing availability of March 3 to March 6. MacRumors reports some locations have the large iPad in stock, but supplies are quickly dwindling.

Best Buy, AT&T, and Verizon also show most 12.9-inch iPad Pro models as out of stock or back-ordered for several weeks in the U.S. Meanwhile, the 9.7-inch iPad Pro remains adequately stocked and available for immediate shipment at both Apple and third-party resellers.

It should be noted that while lengthy shipping times can indicate that a product refresh is just around the corner, supply chain delays can also be to blame. We’ll know for certain if and when Apple makes an announcement in March.

A refresh for the iPad lineup has been rumored for awhile now, with sources claiming an all-new 10.5-inch iPad Pro with slimmer bezels may launch in March. (Or the second half of the year, depending on who you listen to.)

Reports claim that while the top of the device will still include a bezel, to allow for the front-facing FaceTime camera, the bottom bezel will be greatly reduced. The rumored 10.9-inch iPad Pro will have the same overall footprint as the current 9.7-inch model.

A number of rumors have indicated a new iPad in the 10-inch range is on the way, but details have varied with each report. Both KGI Securities analyst Ming-Chi Kuo and publication DigiTimes has claimed a 10.5-inch iPad Pro is on the way. An earlier report from Mac Otakara indicated the device would come in at 10.1 inches.

As far as other changes to the iPad Pro lineup, previous predictions from Kuo indicate an OLED display might be on the way for some iPad models as soon as 2018.

Apple CEO Tim Cook indicated a refreshed iPad lineup is on the way during the latest earnings call, saying “We’ve got some exciting things coming on iPad and I’m optimistic about where things are headed.”