I’ll say it right up-front. If you’re not listening to music, watching videos, or playing video games on your Mac or iOS device via a pair of IK Multimedia’s iLoud Micro Monitors, you’re missing out. These may be the best speakers of this size I have ever heard.

iLoud Micro Monitors consists of two portable, high-performance bi-amped speakers that deliver a combined 50W RMS of power. IK Multimedia says they are great for recording, editing, mixing or mastering audio, editing video, sound designing or gaming. I don’t do much of any of those activities, but I do love to listen to music, play games, and watch videos on my Mac and iOS devices, and these babies deliver like no other speakers I’ve ever listened to.

Included in the box: 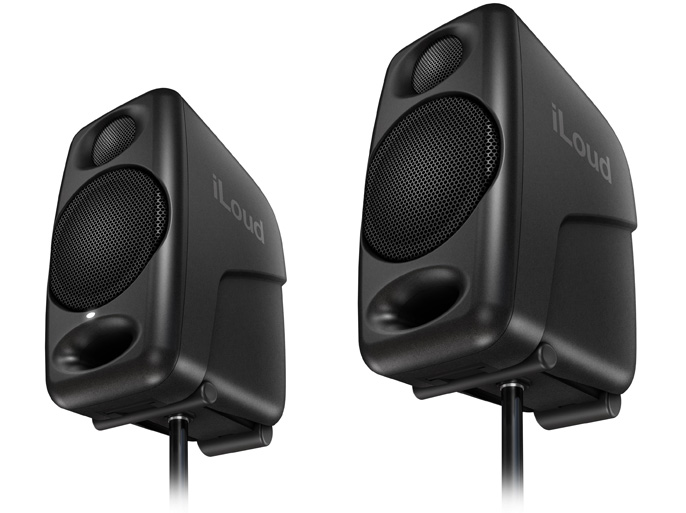 If you’re an iPhone 7 or iPhone 7 Plus user, it should be noted that you’ll need to supply your own Lightning port adapter to connect directly to the Micro Monitors. However, they also allow connecting via Bluetooth, so you’ll have that going for you.

As I have said in previous reviews of speakers and such, I am not a music professional, I have no musical ability, and I am partially deaf in my left ear. That said, if I think something sounds good, imagine how great they’ll sound to someone who knows something about sound. 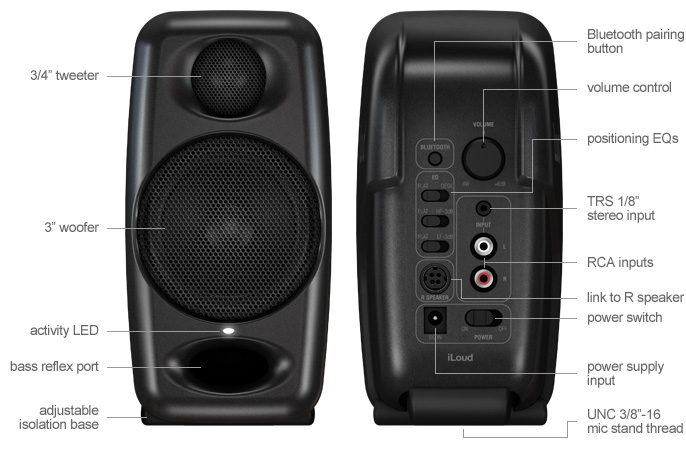 The Micro Monitors are just 7.08-in (h) x 5.3-in (d) x 3.54-in (w) in size, and I have to say that I was not expecting to hear the big sound I heard once I began playing music through these babies. The sound that pumped through these when began playing Michael Jackson’s “Billy Jean” (don’t judge me), knocked me out. The highs were beautiful, and the lows sounded great.

I have long used a set of Bose Companion 3 speakers on my Mac, and I basically compare any other speaker system to my Bose. Say what you will about Bose, but they have served me faithfully for a number of years, and I like the sound. The iLoud Micro Monitors make the Bose speakers I so love sound like two tin cans strung together with string.

I ran through a number of songs, of various genres, and in all cases, the Micro Monitors sounded great! I then played Captain America Civil War via Netflix, and the action sounded fantastic. The loud music played during the action scenes didn’t even bug me as much as it usually does. Video games also sounded great, the special effects and music in the games came through loud and clear.

I then hooked the Micro Monitors up to my MacBook Pro and was equally impressed with the speakers while they were connected to my little workhorse. How did they sound hooked up to the MacBook? Let’s just say I will be shedding more than a tear or two when I have to box up the Micro Monitors and ship them back to IK Multimedia this week. (::SIGH!:: I’ll survive somehow.)

The Micro Monitors are at home on a desk, or on a shelf, as well as in a studio setup on a handy pair of mic stands. They are also surprisingly light and portable, making them easy to pop into the average backpack. (IK Multimedia also sells a cool carrying case for them.) Just keep them turned down a bit when you’re in your hotel room unless you want the House Dick knocking on your door.

As I said, I am not a music aficionado, but for those of you who are, I highly recommend checking the iLoud Micro Monitors out as soon as possible. I believe you will be as surprised as I was when you hear the big sound that comes out of these little speakers. Sure, at a suggested price of $299.99, they aren’t an impulse buy, but if you require great sound in a little package, check them out.

You don’t have to take my word for it, and you shouldn’t. Visit your nearby Best Buy or Guitar Center, they are just a few of the bricks and mortar stores that will likely have a pair you can listen to in-store. The Micro Monitors are also available from the IK Multimedia website, as well as other online merchants, like Amazon. (Where they’re getting five-star reviews.)

I’m not a gearhead when it comes to speakers and such, so I admit I have left a lot of technical data out. However, there is no shortage of such data on the IK Multimedia website, and I highly recommend the technically inclined among you visit the website and geek out to your heart’s content.

Disclosure: I was provided with the iLoud Micro Monitors at no cost for review. I returned the speakers when my review was complete. I was not compensated for this review. All thoughts and opinions are my own. All photos are provided by IK Multimedia because my photos suck, and I don’t want anyone to see my messy desk.