This Raspberry Pi 3 Kit + Mastery Bundle offers the best way to master what you need to know about Raspberry Pi. 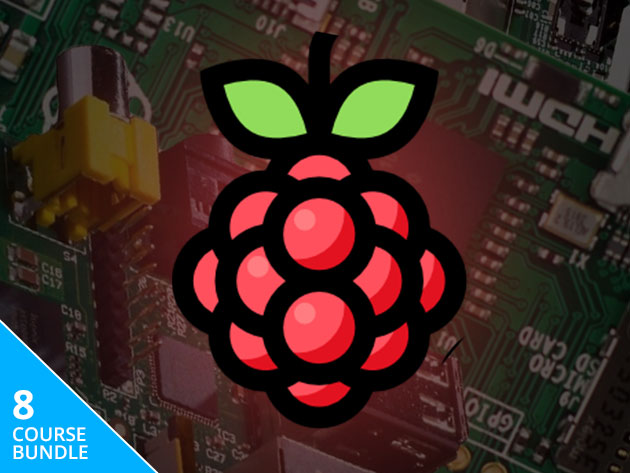 Learn Robotics from the Ground Up

In this course, you’ll be walked through the steps of creating an ArmBot from scratch. With Raspberry Pi Zero, you can build and wirelessly control this robot! By course’s end, you’ll have a nuanced understanding of robotics with Raspberry Pi, and be ready to build your own robot.

Home Automation in 48 Hours Without Coding

The best thing about the Internet of Things? Automation. In this course, you’ll learn how to build IoT projects and remotely control home appliances without coding. You’ll be introduced to Cayenne, the world’s only drag-and-drop IoT project builder, developed to quickly design, prototype, and commercialize IoT solutions.

Use Sensors to Remotely Display Water Temperature & Alert You via Email

The best way to learn is by doing, and in this project-based course, you’ll learn how to measure water temperature using Raspberry Pi. Don’t want to jump in a cold shower? Use Raspberry Pi to notify you when the water is warm. This course is perfect for any IoT enthusiast and will give you a great background in using this little device to interact with the physical world.

Learn How to Program & Control a Robot

Take your intermediate skills to an advanced level with this course covering robotics with Raspberry Pi. You’ll learn how to connect the L239D Integrated Circuit to the GPIO pins of Raspberry Pi and control a robot’s motor. By course’s end, you’ll have the fundamental knowledge necessary to build a basic robot and control it entirely through Raspberry Pi.

Get Up & Running Fast with Bitcoin Mining

Never heard about bitcoin mining? No worries, this course starts at the very basics. You’ll learn all the terminology associated with the mining process, the hardware involved, and much more. You’ll also be briefed about the SHA, which is an algorithm used to implement bitcoin mining. Ultimately, you’ll get down to brass tacks of using Raspberry Pi to mine bitcoin and make real money.

The GPIO pins on a Rapsberry Pi are a great way to interface with physical devices like resistors and sensors. In this course, you’ll learn three complete hardware projects as you understand how to perform physical computing with the Raspberry Pi.

This course is ideal for anyone who would like to explore the possibilities of the newly launched Raspberry Pi Zero. You’ll learn how to program the small LCD screen and display dynamic data, and complete two projects that will solve real-world problems. By the end of the course, you’ll have a fundamental knowledge of automation with Raspberry Pi Zero.

PiCar-V Kit with Raspberry Pi 3 Board

Have Some Robotic Fun with These Raspberry Pi-Powered Cars

The PiCar-V is an open source robot learning kit on Raspberry Pi, and this deal even includes your own Raspberry Pi 3 board. Equipped with a wide-angle USB webcam, this car is powerful with three new circuit boards, but less complicated than other cars thanks to its simpler wiring and provided Python code. Go for a drive through your PC, mobile phone, or tablet – this car works with anything.