Public builds of iOS 15, iPadOS 15 can be downloaded via the Apple Beta Software Program website by users signed up to take part in the testing program. If you’re interested in trying out the betas of the upcoming operating systems you can sign up for the program by clicking the same link.

As usual, MacTrast and Apple both warn users to not install any betas on their daily driver iPhone or iPad, instead only install betas on devices set aside for testing purposes.

iOS 15‌ Notifications have been revamped, adding contact photos for people and larger icons for apps that make them even easier to identify. A new notification summary helps reduce distractions by collecting non-time-critical notifications for delivery at a more opportune time, such as in the morning and evening.

Using on-device intelligence, notifications are arranged by priority, with the most relevant notifications rising to the top, and based on a user’s interactions with apps. Urgent messages will be delivered immediately, so important communications will not end up in the summary, and it’s easy to temporarily mute any app or messaging thread for the next hour or for the day.

With iOS 15, FaceTime conversations with friends and family feel even more natural. With spatial audio, voices in a FaceTime call sound as if they are coming from where the person is positioned on the screen, and new microphone modes separate the user’s voice from background noise. Inspired by portrait photos taken on iPhone, Portrait mode is now available for FaceTime and designed specifically for video calls, allowing users to blur their background and put themselves in focus. In Group FaceTime, a new grid view enables participants to see more faces at the same time.

FaceTime is no longer restricted to Apple devices, as users can now create a shareable link to a scheduled video call,  allowing Android and Windows devices to join ‌FaceTime‌ calls through the browser.

SharePlay allows users to listen to songs together with Apple Music, watch a TV show or movie in sync, or share their screen to view apps together while connecting with friends on FaceTime. SharePlay works across iPhone, iPad, and Mac, and offers shared playback controls, allowing anyone in a SharePlay session to play, pause or jump ahead.

SharePlay even extends to Apple TV, so users can watch shows or movies on a big screen while connecting over FaceTime, and SharePlay will keep everyone’s playback in sync. Disney+, ESPN+, HBO Max, Hulu, MasterClass, Paramount+, Pluto TV, TikTok, Twitch, and many others are integrating SharePlay into their apps — creating entirely new ways to connect.

Focus filters notifications and apps based on what a user wants to focus on. Customers can set their device to help them be “in the moment” by either selecting a suggested focus or by creating their own custom focus. Focus uses n-device intelligence to suggest which people and apps are allowed to notify them. Focus suggestions are based on users’ context, like during their work hours or while they’re winding down for bed, and when Focus is set on one Apple device, it automatically applies to their other Apple devices.

Users can create Home Screen pages with apps and widgets that apply to moments of focus to only display relevant apps and reduce temptation. When a user’s Focus is blocking incoming notifications, their status is automatically displayed to others in Messages, reflecting that a user is not currently reachable. 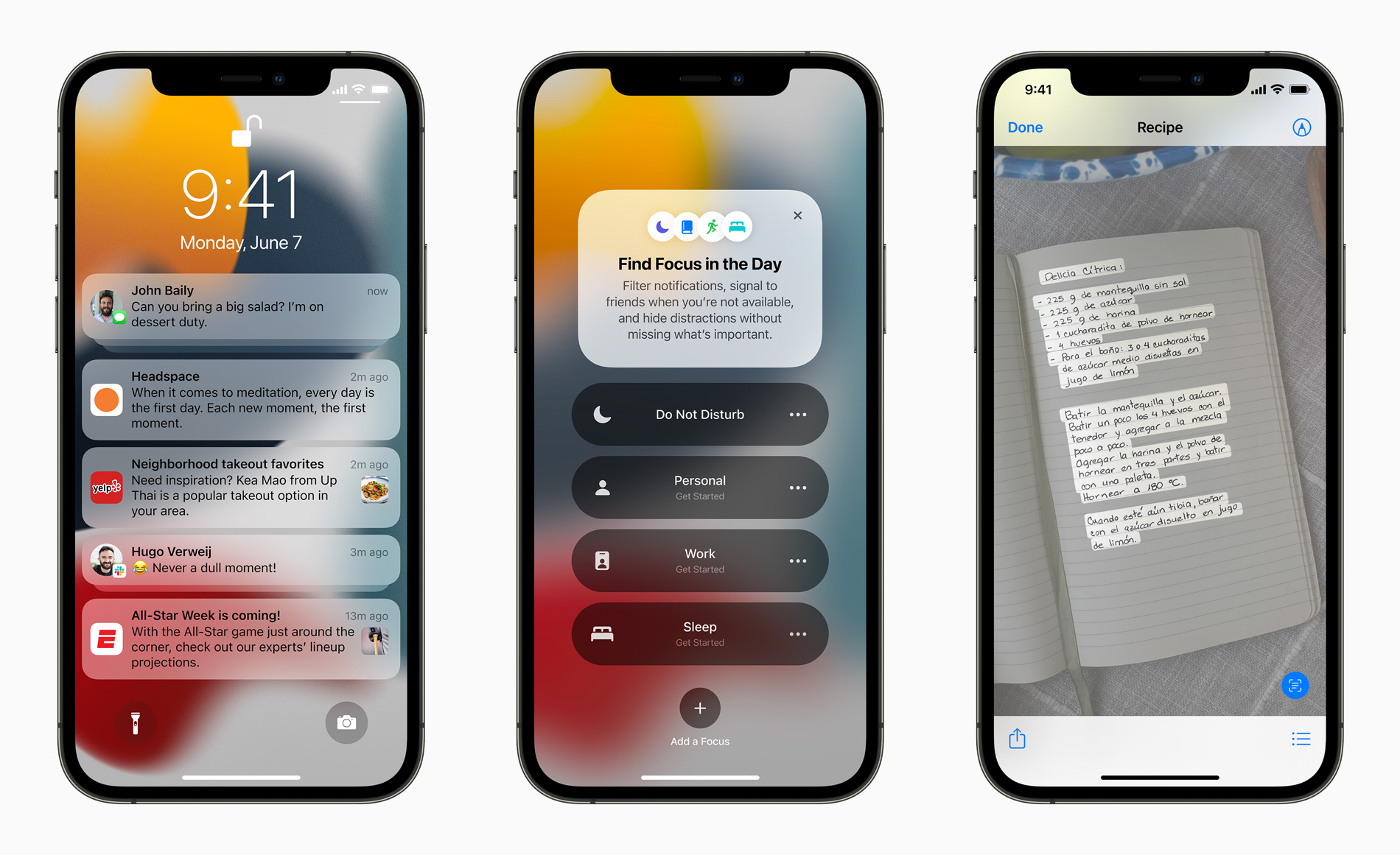 Photos will feature a “Live Text” feature that allows users to highlight and select text in images, allowing users to copy the text and copy it into text files, emails, messages, and other apps.

Photos‌ will also show up in iOS 15 Spotlight searches and Apple Music, which uses on-device intelligence to personalize song suggestions that bring memories to life.

Later this year, customers in participating states in the US will be able to add their driver’s licenses or state IDs to Wallet. The Transportation Security Administration is working to enable airport security checkpoints as the first place customers can use their digital Identity Card in Wallet. Identity Cards in Wallet are encrypted and safely stored in the Secure Element, the same hardware technology that makes Apple Pay private and secure.

Notes adds user-created tags that make it easy to quickly categorize notes, and mentions allow members of shared notes to notify one another of important updates. An all-new Activity view shows the recent history of a shared note.

‌iOS 15‌ will be compatible with all of the same devices as iOS 14, which is all iPhones from ‌iPhone‌ 6S and newer. The developer preview of ‌iOS 15‌ is already available to Apple Developer Program members, and a public beta will be available starting next month.