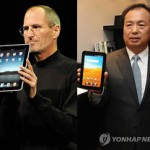 Judge Lucy Koh, who is officiating the legal tug of war between Apple & Samsung, has dropped the hammer on Samsung and dealt the Korean electronics a bit of blow. Samsung have been ordered to bring Apple behind closed doors and show the iPhone / iPad maker a total of 5 soon to be released Samsung SmartPhones / Tablets.

The Judge ruled that Apple should be provided with limited early access to the devices to determine if the devices infringe on any trademarks or patents that Apple may hold.

Apple claim that Samsung is intentionally modeling their devices on features and specs of the iPhone and iPad and is looking to the courts to prevent Samsung from developing devices that may infringe their intelectual property.

While this is a bit of a blow to the integrity of Samsung, Judge Koh pointed out that this in no way means Samsung is guilty of any infringement. In the order, Judge Koh wrote:

“Although the Court expresses no opinion on the merits of Apple’s claims, the Court notes that Apple has produced images of Samsung products and other evidence that provide a reasonable basis for Apple’s belief that Samsung’s new products are designed to mimic Apple’s products.

“In particular, the design and appearance of Samsung’s forthcoming products and packaging are directly relevant to Apple’s trademark, trade dress, and design claims.

“Because these claims are subject to consumer confusion and “ordinary observer” standards, the products themselves and the packaging in which they are sold are likely to be central to any motion for preliminary injunction.”