One of the biggest problems with virtual keyboards on a touchscreen display such as the iPad’s is that it offers no feedback, which makes them harder to type on than a conventional keyboard. Apple may be working on a solution using coded magnets and ferrofluids that can be built into future iPads. 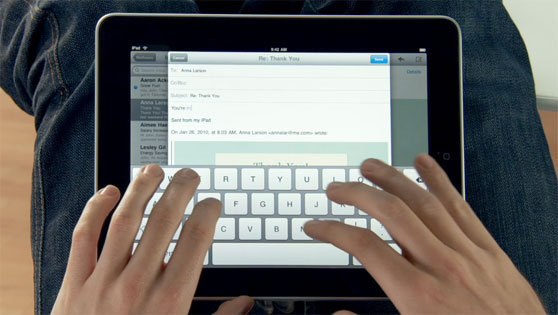 Patently Apple points to an Apple patent that details a system employing coded magnets and ferrofluids to provide haptic feedback on a touchscreen or virtual keyboard:

In this manner, a user could be provided with a touch-sensitive surface that gives visual feedback as it senses a keystroke.

Apple has filed other patents dealing with providing feedback on touchscreens. Last July, another filing detailed a method that employed piezoelectrics and “acoustic pulse recognition” to provide users with feedback as they type.

While we can’t be sure which, if any, of these technologies will be used in future devices, the possibilities are promising, and I for one look forward to seeing what Apple does in the future to improve the user experience with it’s products.