With Apple’s new Mac Pro set to release later this year, many have wondered whether Apple is planning on releasing a new display to accompany their new professional-level Mac. Apple’s repeated mentions of 4K support for the new Mac Pro during their WWDC keynote (and their official Mac Pro site) are more than a little interesting, and the Thunderbolt display is, in fact, overdue for an update – so I decided to do a bit of checking around on retail stock levels. 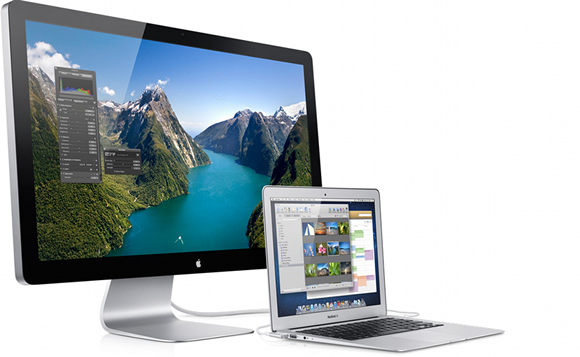 What I found was particularly interesting. While stock levels appear stable at many Apple resellers, three major online stores in particular list the device as entirely out of stock – Adorama, Frys.com, PowerMax and MacMall list 5 or fewer units in stock. Even more interesting, Adorama lists the product as not only “out of stock,” but “no longer available.”

I gave them a quick call to see what was up, and was greeted by Rose from Adorama Customer Support. Rose exclusively informed MacTrast that “The manufacturer is no longer allowing us to order new inventory for this item, and it has been removed from our system,” although she did note that Apple hadn’t provided them with any additional details on whether a new product would replace the Thunderbolt Display.

Further, MicroCenter reports that they are out of stock online, and at most of their retail stores (at the time of this writing), and a phone call to the reseller informed me that they are also not currently able to order any more Thunderbolt Displays from Apple.

I also took the opportunity to contact both CDW and Frys.com. CDW informed me that they are currently out of stock, and expanded on that to inform me that they currently only have 7 units available, but they also have 15 backorders to fill that that could not give an estimated availability date for, and that they have a limited ability to order new units from Apple as well. Meanwhile, Frys.com informed me they are out of stock on line, and have less than 2 units at any given retail store (and that most retails stores are completely out of stock.)

Here are my full retail supply check results, as of 1:35 PM MT this afternoon (for model MC914LL/A and/or MC914LL/B, whichever was listed on each respective site).

Backordered, out of stock, or “no longer available”:

Remember that gorgeous wave-themed background Apple demoed alongside OS X Mavericks? Interestingly, the version Apple posted on their website is large enough to suit a Retina iMac or Retina Thunderbolt Display, despite the fact no such device has yet been announced. Even if Apple doesn’t launch a desktop Retina display, however, they will likely at least update the Thunderbolt display with a thinner design and USB 3 support.

Apple typically updates their displays alongside the Mac Pro, with the exception being the release of the Thunderbolt Display in 2011 – Apple, of course, did not update the Mac Pro at that time. It’s worth noting, however, that at the time, potential new Mac Pro level hardware was in a lull.

While this isn’t a certain sign that new Thunderbolt Displays are on the way (it could also indicate manufacturing delays or even discontinuation of their Thunderbolt Display), the information I received was extremely interesting, to say the least. We’ll keep you updated if and when we have more information.

Considering the announcement of Seiki’s $700 39-inch 4K display earlier today, it seems reasonable that Apple could offer such a device easily at between $1000 and $1500 at any point moving forward.