The idea of a 64GB iPhone is not at all new, but releasing one now, with so little time remaining for the iPhone 4, seems odd. Nevertheless, an internal memo from Verizon is now indicating that an iPhone 4 with 64GB of storage may be on the way. 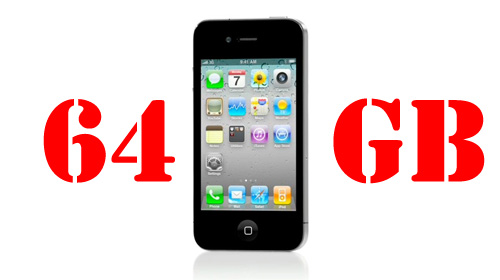 The memos, recently published by a Verizon retail, mention a “White iPhone 4 (32 and 64GB)” in the small print, which has been the source of a degree of speculation. Russell Cellular circulated the memos last week which were picked up by This Is My Next. This Is My Next writes:

… but the launch seems totally plausible considering that it’d take Apple very little effort to make that change on the assembly line. In other words, even though development of the next iPhone (whatever it ends up being called) is obviously well underway, there’s no reason to think that Apple, Verizon, AT&T, and everyone else wouldn’t mind giving the current model a summer-long shot in the arm courtesy of an easy capacity boost.

I will have to respectfully disagree with This Is My Next. While it may be easy for Apple to produce such a device, would it really be worth it, or even a good idea to launch a third model of a phone that it about to become yesterday’s news? I don’t think so. I also don’t think many would purchase the device, because if true, it would indicate that the iPhone 4S/iPhone 5 will likely have a similar storage option.

My conclusion? Either this is a typo, or intentionally false information put out to stir people up.