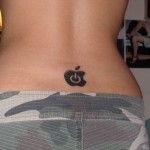 Have you ever wondered why you’re such a nut when it comes to Apple products? Ever questioned why you have to get the iPad 2 even though your iPad 1 is every bit as good a device? Well, according to a recent BBC documentary it’s how your brain is wired! And if you’re an Apple Fanboy, you are not too dissimilar to a religious lunatic!

The documentary, titled Secrets of the Superbrands (UK only), explores the fascination we have with Apple’s shiniest and brightest iDevices and how we MUST splash the cash and gobble up everything they release.

In an article published on the BBC site, Alex Riley details his experiences when he dug deep into the psyche of Apple fanboys. Riley even goes as far as to compare Apple Fanboys to religious lunatics! Below is an excerpt taken from the BBC site…

“The scenes I witnessed at the opening of the new Apple store in London’s Covent Garden were more like an evangelical prayer meeting than a chance to buy a phone or a laptop.

The strangeness began a couple of hours before the doors opened to the public. Inside the store, glassy-eyed staff were whipped up into a frenzy of excitement, jumping up and down, clapping and shouting.

Apple staff encouraged the hysteria at the new store opening in Covent Garden
When the doors finally opened, they hysterically “high-fived” and cheered hundreds of delirious customers flooding in through the doors for hours on end.

And what did those customers – some who’d travelled from as far away as the US and China and slept on the pavement for the privilege – find when they finally got inside?

Well, all the same stuff as in the Apple store half a mile away on Regent Street. No special offers, no free gifts (a few t-shirts were handed out), no exclusive products. Now that’s devotion.

I searched high and low for answers. The Bishop of Buckingham – who reads his Bible on an ipad – explained to me the similarities between Apple and a religion.

And when a team of neuroscientists with an MRI scanner took a look inside the brain of an Apple fanatic it seemed the bishop was on to something.”

The results suggested that Apple was actually stimulating the same parts of the brain as religious imagery does in people of faith.”

What do you think?