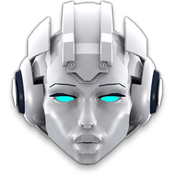 f you’ve ever played Portal or Portal 2, D-Capitatrix might be familiar to you.  D-Capitatrix, also on the iPad and iPhone, brings a wormhole 2D style puzzler to your Mac.

Using this style of gameplay, you have two portals to use and transfer your robo-girl’s head to her body. You first have to collect battery cells before you’re able to transfer her head onto her body. As you play through the game, there are traps such as electric charges, pis of fire, etc, that will destroy the head if you run into certain traps. Each puzzle is really thought out and well designed. Of course, they get more tricky as you go through each level and with all the traps, it really makes you think and strategize. 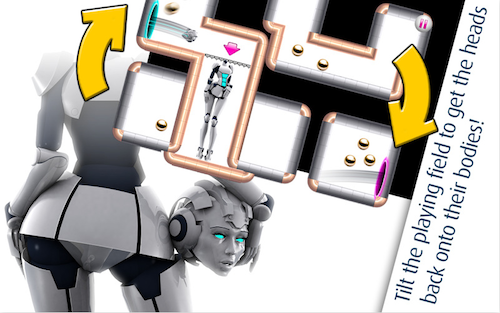 Everything about d-capitatrix ($1.99 App Store Link) is sleek and tight, from the controls and graphics, to the music and sound. Because there are so many elements that play into the puzzle such as crushers, explosives, and other traps, it keeps you thinking and examining the puzzle to find ways around it. So, it keeps you locked in, even though the game itself isn’t as long as I wish it would have been. The portals in the game, when placed near the cells, react well as far as physics go. 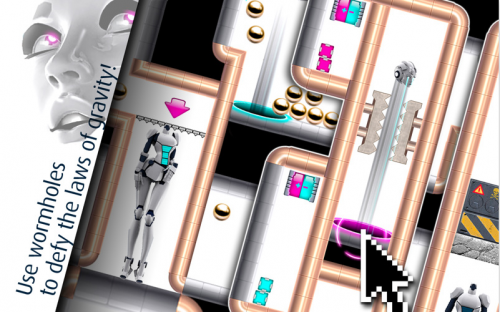 The gameplay in d-capitatrix is really simple. The task of each puzzle is to get the robot’s head on her body by guiding it through warp holes. Along the way, you have to dodge traps, which tale some strategy and thought, depending on how skillful you are. If you’ve played Portal before, you should pick this up with no problem. The physics in the game are accurate to what they should be. When placing wormholes, which you can only do on the grey area of the puzzle, the head lands where you expect it to, and of course, depending on how fast it’s rolling, it will roll further and faster throughout the puzzle. 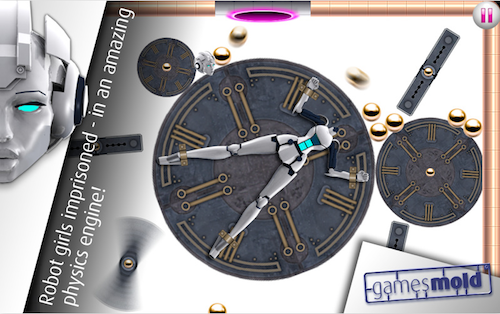 The graphics in d-capitatrix are by the best I’ve ever seen in a puzzle game on the Mac App Store. Everything looks really bright, from the robot to the traps, and the puzzle itself. The music goes really well with the game. After playing it a while, the music got stuck in my head. As you’re guiding her head around the level, she’ll complain that you’re hitting her head back and fourth on the walls and to take it easy, which is pretty entertaining at times. 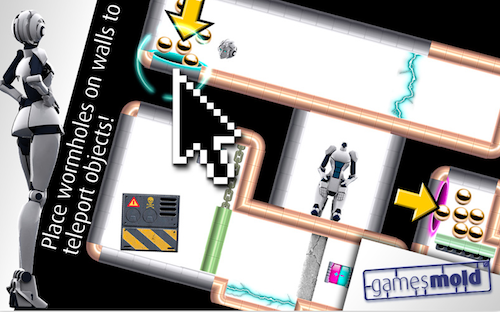 The only settings you can change is the sound, but that’s not a problem at all because everything is pretty straight forward. The controls are very responsive and simple. “A” moves her head to the left and “D” moves her head to the right, you can also use the arrow keys. You don’t have to change the controls because you’re able to use the arrows or “A” and “D” at the same time.

If you want a challenging, fun, intuitive puzzle, pick up d-capitatrix There are a lot of puzzle game son the Mac App Store, but, this is one of the more entertaining ones. From top to bottom it’s a lot of fun. A puzzle game that can be simple yet challenging is hard to find, but d-capitatrix does so many things right. Besides the game only having 30 levels, which may be short to some if you’re used to Portal type puzzles games, it took me a while to get through all the levels and I love puzzle games. I play them all the time. Who knows, they might even update it with more levels for those of who who may find it somewhat short.