Although HTML5 has been a much discussed topic in the Mac world, up until now developers were pretty much doomed to hard-coding to develop great HTML5 websites. Two former Apple engineers decided to change all that, founding Tumult and developing Hype. 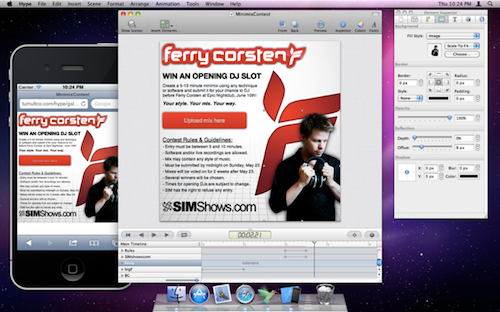 After forming the startup company Tumult to address these issues, they worked together to develop a solution, which they call Hype. Hype is a brand new Mac application taking the pain out of creating eye-catching animations on the web that don’t require the Flash plug-in.

Jonathan Deutsch, one of the co-founders and former engineering manager for the Mail.app backend, explains in an interview with Paul Hontz’s The Startup Foundry:

At one point after a trip to Europe, I wanted to make a photo website that would be as nice as a beautifully bound photo album, and use lots of effects. Coding this with HTML5 would have been a nightmare. There had to be a better way, and that’s how the idea for Hype was born.

The $30 download (limited introductory pricing) is already the top-grossing program on the Mac App Store. If you do any web development, and haven’t already tried this excellent new tool, I wholeheartedly recommend it. At just $30, it’s probably the cheapest investment you’ll ever make on quality development software ($30, Mac App Store)