One of the most beautifully rendered games available for the iPad, Infinity Blade, will be getting its first major upgrade tomorrow. The update, called Infinity Blade: Arena will bring multiplayer support, a survival mode, and new in-game content. 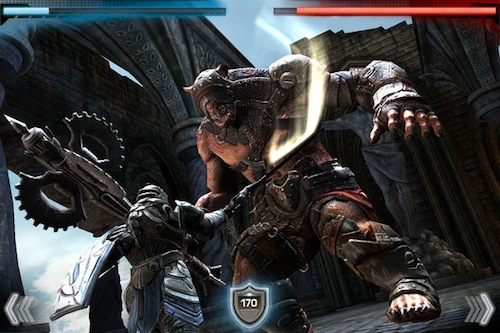 Promised last year, Infinity Blade’s first major update is finally about to be released. The free update, called Infinity Blade: Arena, brings a lot to the table. First, it introduces a feature called ‘Enter The Arena”, in which a player can challenge others to battle online via the Game Center.

Also new is a Survival Mode, in which you can see how long you can last against massive hordes of Titans – the new mode also features FaceBook integration with support for sharing shots of your avatar with other players.

There’s also a massive new content pack, bringing more than two dozen new rings, swords, shields, and helmets for players to collect and master, as well as new achievements, new leaderboards, and further surprises that have not yet been unveiled.

If you do not yet have this great game, it comes highly recommended, and only costs 6 bucks (App Store Link) – get it now so you can practice up before the big update!