*Scroll to the bottom for a chance to win one of 5 copies of LogMeIn Ignition for iOS!

LogMeIn Ignition ($30, App Store Link) is one of those apps that people scoff at until they use it for themselves – the idea that you can control a high-res Mac with a 10″ iPad seems laughable. Then the magic begins. Read on for my full review. 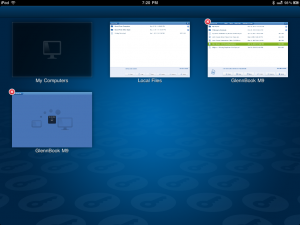 What Does It Do?

LogMeIn Ignition is a remote desktop program that allows users to access their computer, anywhere in the world, from a smartphone. The iOS version (universal, though I reviewed it with an iPad) has been around for a while, improving over time. This review should establish that a large-screen device like the iPad is an ideal device for VNC and remote connections. 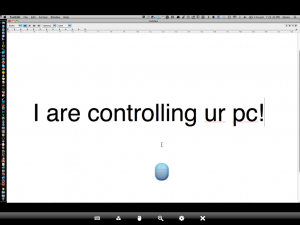 LogMeIn Ignition is a very powerful, feature-rich tool that comes in handy over and over again, and while it seems like a 10″ iPad would be far too small to effectively view a 15″ screen, you’d be remarkable wrong. LogMeIn ignition has shown that is it possible, and not just possible, but works damn well. Here’s my short summary of pros and cons, after which my full review will follow. 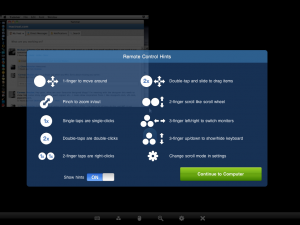 It’s extremely simple to set up LogMeIn ignition for its first use. You do need a free LogMeIn account, and a small software client to run on your Mac or PC, but these are all simple and straightforward to set up. I was set up and ready to go in just 15 minutes.

When the app is fired up on the iPad, a login screen is presented to get into the LogMeIn server. Once inside, a list of the user’s computers that can be controlled is presented. Tap the computer name in the list and then a login screen for that computer is presented. Once the credentials are verified the remote desktop appears in just a few seconds. 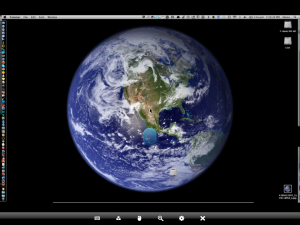 The LogMeIn interface is designed to be operated totally via touch, and the cursor tracks your finger. There’s a switch on the bottom bar of the app to choose whether tapping the screen performs a right-click or left-click operation. You can expand your view of the desktop, and simply pinch to zoom in and out, and drag the entire desktop around with your finger.

The app runs quickly and smoothly on either WiFi or 3G connections, although I did experience some troubles in areas of poor connectivity, which is to be expected.

The File Browser interface for LogMeIn is equally easy to navigate, allows you to choose and view any file from any drive connected to your Mac, and natively supports every document and image format I dared try on it – and I tried several. 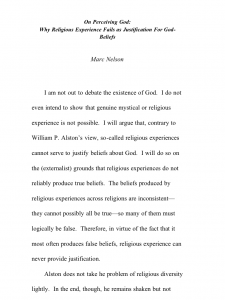 LogMeIn Ignition has far more to in than meets the eye. On the face of it, it’s just a simple program for remotely viewing your screen. But a deeper examination reveals the extraordinary attention to detail paid by the developer – the keyboard layout fully supports all of the Mac’s function keys, zooming is a simple and straightforward affair, and all of the advanced features present in LogMeIn are easy to use and readily accessible at all times.

There was not a single “headache moment” for me in using this app, and it does far more than I honestly expected it to. 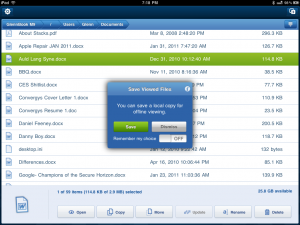 While some people worry about security with this sort of thing, and rightly so, LogMeIn has this figured out. All communication and transmission is done over a fully secured and encrypted connection, and even though you have a client installed on your Mac, both your LogMeIn credentials AND your Mac’s credentials are required before a connection can be established. 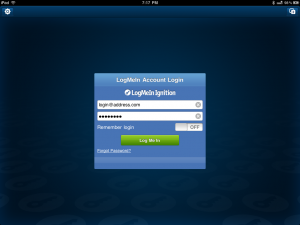 Surprisingly, even when running highly graphical programs on my Mac, I did not notice any significant lagging, screen artifacts, or jumpiness in the LogMeIn app – display, while it did occasionally fall out of perfect sync, was buttery smooth the entire time. I was also surprised at how little bandwidth it actually used on my home network – less than 500K up and down. 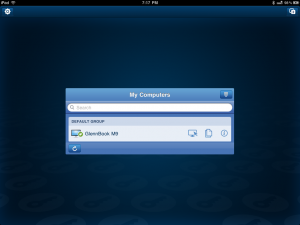 The obvious usage of this app is to be able to access and control your home computer while on the go. When I’m not writing, I am a freelance computer technician and neighborhood tech guy. By simply installing and setting up LogMeIn on my client’s computers, I can quickly and effectively solve issues without having to go to their home or pull out my large and heavy laptop. The ability to access all my files on the fly is also a beautiful thing. 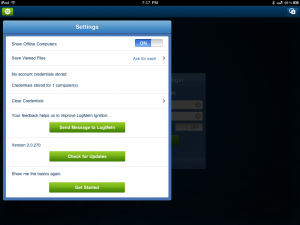 LogMeIn Ignition might be expensive, but in all honesty, now that I have used it, I can’t imagine being without it. For such an in-depth and truly functional tool, $30 really is a small price to pay, especially considering that it’s a one-time fee, and there is no service to pay for, such as with other commercial remote desktop solutions on the market.

LogMeIn Ignition has a lot going for it, and is worth every penny that the developer asks. It works with both iOS and Android devices, gestures were smooth, and it’s less expensive than most other comparable options over the long haul. I award this app 4.5 out of 5 points. The app can be obtained from the App Store ($30, App Store Link). Trust me – once you use this app, you’ll wonder how you managed to get along without it. For more information, visit LogMeIn on the web.

I really loved reviewing LogMeIn Ignition – it remains one of my favorite iOS apps even now, thus I naturally want to share it with you. In this spirit, I invite you to enter to win one of 5 copies of LogMeIn Ignition for iOS!

The giveaway will run through next Tuesday (July 26), with a winner being drawn on Wednesday (July 27). Interested? Here’s how to enter!

Tweet the following phrase to be eligible to win:

Win 1 of 5 copies of LogMeIn Ignition from @LogMeIn and @MacTrast – RT to enter! http://mctr.st/r2vzXC #MTLogMeIn

**7/26/11 We have now drawn the winners for the 5 copies of LogMeIn Ignition, and they are: @martinuwh, @voodoobill, @johnlabausa, @ajkartman, and @NiTiSHmurthy! You’ll all be getting your codes shortly!