You might remember our review of OWC’s Mercury Extreme Pro SSD and Data Doubler back in February. OWC has now upped their game dramatically, bringing 6G Sata support, and we’re thrilled to be among the first to review one of their new models.

With the new MacBook Pros supporting Sata 3, or 6G Sata, and several SSD manufacturers building products for the updated interface, one might wonder if the difference is significant enough to merit the upgrade. I’m here to tell you that it is.

Once again, I opted to keep my current hard drive in the setup and remove my optical drive, using the assistance of OWC’s Data Doubler kit. I wasted no time in getting ready. I booted up from my old drive, migrated my iTunes library, and my iPhoto library to an external hard drive. Then it was time to perform surgery. 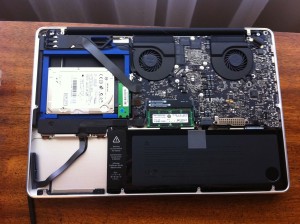 At this point, I placed a fresh install of OS X Snow Leopard on the Mercury Extreme Pro 6G (I’m using the 120GB version), and used Migration Assistant to transfer everything over – it did fit, but had I not transferred my iTunes and iPhoto libraries to an external drive, it would certainly not have even come close.

Once I was sure that everything had transferred correctly, I formatted my old drive, cloned the external drive containing my iTunes and iPhoto libraries to it, and I was good to go – all the files I need and use, all in my computer… just without an optical drive (which I admittedly rarely use anyway).

Once I had everything setup, I booted from the SSD. I waited for the spotlight indexing to finish, then I restarted it twice more before doing any speed tests, to make sure everything was exactly as it should be.

My first “normal” boot using the SSD took only 9 seconds – a significant boost from the 17 seconds that it took when using OWC’s last-gen Mercury Extreme Pro hardware, and a welcome change! 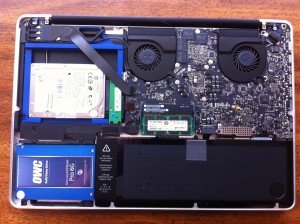 Not only did OWC up their standards with a shiny new SSD line, I upped my own game by introducing new methods to benchmark the device. In addition to so-called “common benchmarks”, such as how long it takes to boot, or how long it takes to perform a common task such as launching PhotoShop, I used the DigLloydTools software suite to gather up some actual numbers.

Just for comparison’s sake, PhotoShop, which booted in about 3 seconds on the original OWC Mercury Extreme Pro, booted in less than 2 seconds on the new setup. Further, converting the same MKV movie to MP4 as I did in my original review, I achieved a speed of 12 minutes – shaving 5 minutes off the Mercury Extreme Pro first-gen, and shaving an impressive 22 minutes off of the time it took on my original 7200RPM drive. Now, without further ado, allow me to present my more formal benchmark results:

The results are impressive. I was able to achieve over 530MB/Sec read speeds, and up to 509MB/Sec maximum write speeds, far surpassing the capabilities of SATA 2, and nearly reaching the limits of SATA 3’s 6G speeds.

OWC’s new line of SSD’s truly shocks and impresses me. I was initially impressed with how dramatic it can be to switch from a rotary drive to an SSD, and I was almost equally impressed with the gains I experience between OWC’s two generations of SSD, with the new Mercury Extreme Pro 6G dramatically improving on its predecessor.

For anyone entertaining purchasing or upgrading an SSD, if you happen to have one of the new 2011 MacBook Pros that support Sata 3, I wholeheartedly recommend OWC’s new lineup. It’s extremely fast, performs well, has no issue resuming from sleep or hibernation, and in general will simply knock your socks off. 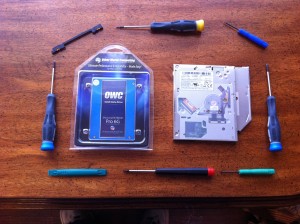 I was more impressed with OWC’s new SSD lineup than I have been with a piece of hardware for a very long time. For anyone interested, pricing starts at $320 for the 120GB version, moves to $579 for the 240GB version, and $1799.99 for the massive 48oGB version. You can find more information or purchase these (the larger sizes are currently on pre-order status) over at OWC.