Pioneer has unleashed a new car radio called the AppRadio. What’s interesting about it? It’s the first radio with a full touch screen, and integration with iOS apps. It also features Bluetooth connectivity, a GPS antenna, and a 6.1 inch screen. 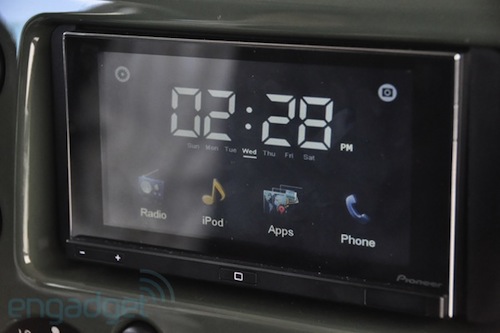 The device initially surfaced last month through some FCC filings. Pioneer officially announced the device today, which is used with a dedicated iOS app (already available). The screen is 800×400 pixels, and it can plug directly into an iPhone or iPod Touch sporting the free app. Once connected, the AppRadio will not only get usual access to your music library with album artwork and song information visualized on screen, it will also be capable of letting you interact with iOS calendars, maps, contacts and photos using the touchscreen device.

Pioneer has gone above and beyond to enable such deep iOS integration, and many apps, like Pandora and Rdio, nave announced versions of their apps designed to work effectively with the AppRadio. It’ll be priced at under $500 when it becomes available sometime in June.