“Oh hi, productivity! Where have you been?” That’s what people will be saying in their offices today as they play the Angry Birds web app on their Chrome browsers. The app was released today, and is free. Read on for the details. 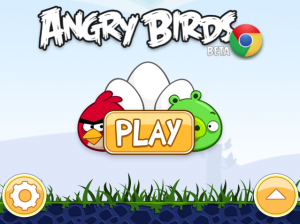 Google obviously doesn’t mind destroying an entire productive day for employees everywhere. The king of search engines has released a special free browser-based version of Angry Birds for the Web App Store, using HTML5, and for FREE. And they said that just one year ago, it couldn’t have been done.

The announcement came via Google I/0. a massive Google-centric conference taking place right now in San Francisco. The new browser-based version of Angry Birds is a testament to how far Google’s Chrome browser has come in a short time. According to Sundar Pichai, Google’s senior vice president of Chrome, Angry Birds in a web browser wouldn’t have been possible a year ago. With a graphics rendering speed ten-times-faster than earlier versions, today’s Chrome can make it happen.

The free version of Angry Birds features the game’s first level, Poached Eggs, along with a set of exclusive Chrome-themed levels. You can install it now via the Chrome Web Store. It runs rather nicely, and as an added bonus, remains cached for offline play.

Check it out for yourself over at the Chrome Web App Store (P.S.: This works better in Chrome Canary than in regular Chrome).