According to a report from 9to5Mac, Phil Schiller has chimed in on the White iPhone 4 thickness issue, claiming that the white iPhone 4 in fact is not thicker than the black version.

The story goes that a 9to5Mac reader tweeted Schiller to see if the news is really true. Schiller responded through a Twitter direct message, which you can find below courtesy of 9to5Mac.

It’s unclear why Schiller chose to send a direct message instead of a public response.. it’s also unclear exactly what Phil means by this – clearly photographed evidence strongly suggests that the white iPhone 4 is indeed thicker, as evidenced by the below picture. 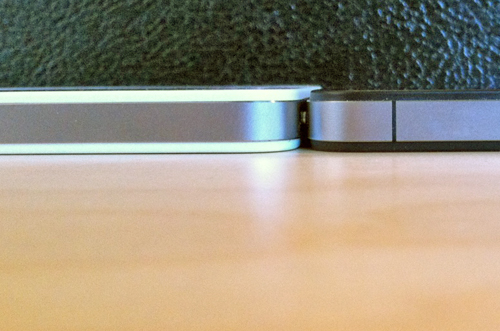 Perhaps Schiller thinks that this may just be a manufacturing anomaly, or a slight difference is just one batch of the white iPhone 4? The folks over at BlogDoiPhone disagree that the white iPhone 4 is thicker, and have provided some evidence of their own, including this image:

Perhaps this lends support to the theory that there may be slight variances between batches? Or perhaps (yes, this is an obvious Antennagate reference) everyone’s just measuring it wrong…

What are your thoughts? Vote in our poll, and sound off in the comments!