It seems like publishers of all types are literally flocking to the iPad – last weak it was Hearst, and today, Condé Naste, publisher of the New Yorker (among other magazines) has announced an iPad subscription deal with Apple. 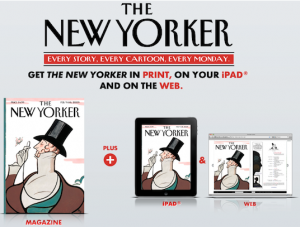 The agreements appear to mark the end of a stalemate which devalued publishers’ iPad applications while also keeping some of the most popular periodicals from the best-selling tablet. Readers of the New Yorker can now pay $5.99 per month for the iPad version, instead of $4.99 per issue. Most importantly, subscribers to the print magazine now get the iPad app for free. Previously, print subscribers were required to pay extra for each issue available on the iPad.

Time Warner appears to be the last publisher to work out a subscription deal with Apple. The new round of talks between the Cupertino, Calif. tech giant and publishers seeking to get a piece of the growing iPad advertising pie is being confirmed by the New York Times‘ media columnist David Carr.