Yesterday I reported that one of the BTO options for the new iMacs is a dual-drive configuration with one HDD and one SSD. New information has come to light revealing that the new iMacs might report the union as a single volume. Interested in what’s happening and how it works? Read on.

What’s intriguing here is that this hybrid option that Apple offers is met with a note left by Apple informing users that OS X will come preinstalled on the solid state drive, leaving space for documents and files on the larger standard hard drive.

iMac also offers an optional 256GB solid-state drive (SSD), which has no moving parts and delivers increased drive performance for many operations. The 256GB SSD can be purchased in place of the standard hard drive or in addition to it.

Ordinarily, this would seem normal, as there are ways to make this work effectively, such as moving your iTunes library, photos, videos, etc onto the second drive, but reports are surfacing that, even though there are two drives installed, they might appear as one single volume.

The answer, it seems, might lie in Apple’s use of the new Intel z68 platform, which allows for a caching system called “Smart Response Technology.” The technology basically works like this: In a configuration where an SSD and a standard hard drive are both installed, the smaller SSD acts as a “system cache” for the much slower HDD. The OS is cached on the SSD for faster loading times, but the user only sees one drive in the Finder. 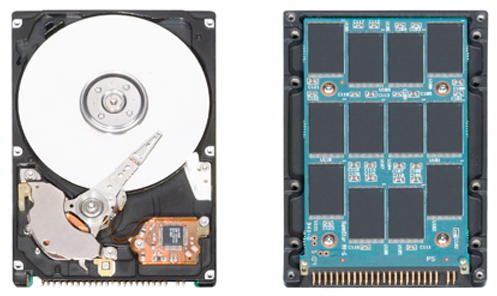 For those of you that aren’t aware, cache is basically a buffer that’s used to store commonly used data, so that the data can be recalled much faster at a later time.

Smart Response is really an ingenious idea, because it takes all the thinking out of managing which content is on your SSD vs your HDD, instead intelligently managing the hardware and making the most efficient data-related decisions on your behalf. The technology uses the SSD’s low access times and incredible speeds to buffer the slowness of the beefy platter-based drive you have in there. This has been tried on a smaller scale to some success with “”hybrid” hard drives, such as the Seagate Momentus XT, and these types of solutions seem to work well.

It’s unclear whether this technology might partially explain the 4-6 week delay in machines configured in this matter, but it might be the case that Apple is waiting for Intel’s new solid state drives, which, being Intel products, would work better under this technology.

If nothing else, what’s clear about this is that it raises some really interesting technical questions, and might be a way to cost-effectively balance the speed of an SSD and the storage of a larger platter-based drive for a lot of users.

Build-to-order lead times on the new iMacs with any SSD option (not just the HDD+SSD ones) are “4-6 weeks”, so it’ll be a little while before someone out there gets their hands on one and we can find out for sure — unless there’s an Apple store with a display model that can be looked into.