A new survey conducted by ChangeWave has revealed that, despite the fact that new Android hardware is continually being released, most customers still prefer the iPhone. 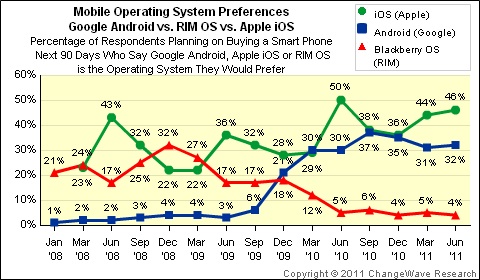 According to the survey, 46 percent of respondents who planned to buy a smartphone within the next 90 days will choose an iPhone, compared to just 32 percent who plan to purchase an Android-based handset.

The survey polled over 4,000 North American consumers, and also showed that RIM has now reached their lowest point ever, with just 4 percent of users planning to purchase one of their BlackBerry handsets.

These numbers only stand to further benefit the iPhone once iOS 5 and iCloud are released this fall, as the survey found that 29% of Apple product owners say that iCloud increases their likelihood to buy Apple products in the future, and 13% of non-Apple owners responded that iCloud would increase their likeliness to buy new products as well.