Final Cut Pro X has been out since the 21st of June however, I’ve only just managed to get my hands on it! It’s had mixed reviews by professionals and amateur creatives alike but what will I think of it? Is the new version enough to drag me away from my beloved Final Cut Pro 7 or is it just a spruced up version iMovie? Read on to find out…

The first thing to stand out about Final Cut Pro X is the new design. Below is a comparison between the X’s design and FCP7’s. 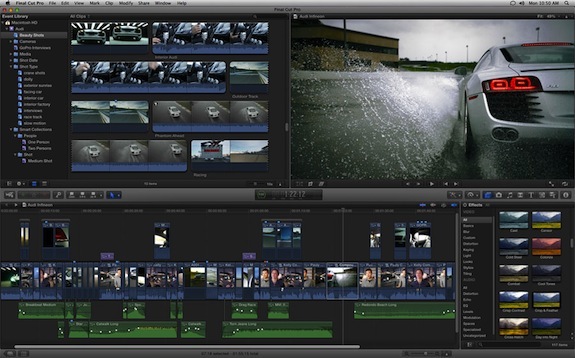 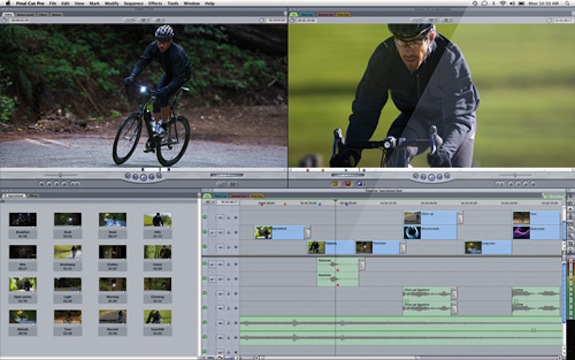 Final Cut Pro X obviously has a much darker theme. I assume that this is to draw focus towards the ‘canvas’ area rather than the rest of the application, however I can’t help but feel that FCP7 has a more user friendly theme. Everything is much easier to read against the light grey background. I constantly found that I had to strain my eyes to read some of the text on FCPX. Noticeably absent from FCPX is the viewer window. Personally the viewer window is a vital tool for me, I use it constantly to preview footage, create eye catching title sequences and colour correct my clips. Getting rid of the viewer window is a very brave move by Apple. Hopefully it was a well made decision. 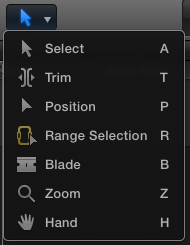 Tools such as the razor, the trim tool and the hand tool are all presented in a neat, drop down box. This is a much nicer way to view all of your tools compared to FCP7, which had a separate window for accessing all of the doohickeys you will possibly need.

The way that you get hold of effects, transitions and generators has also been changed. Rather than accessing them through the viewer window in FCP7 there are a row of thumbnails which give you access to all of FCPX’s preset effects and transitions. I believe that this is the first time that Final Cut has come with preset effects ready to use. There are a broad range of effects from simple colour correction to outlandish distortion effects. Every preset is relatively CPU effective, meaning it does not take up a lot of your Mac’s CPU.

A great feature that FCPX has to offer is background processing. I cannot begin to count the amount of times I’ve had to stop editing to wait for FCP7 to render something. It ruins the creative workflow and takes up a lot of time when working with big HD files.

Importing files has also taken a large step forward. Much like iMovie the user now organises his/her files in events. The footage can also be organized in keywords and added to a favorites folder, much like in iMovie.

Critics have slammed FCPX for not fitting into some people’s workflows. FCP7 was exceptionally good at integrating seamlessly with multi-computer, multi-hardware workflows. FCPX simply does not have the support for these situations, this is obviously going to be a big problem with some larger companies.

There is a HUGE difference between FCPX and FCP7 and quite honestly there should be. FCP7 Studio costed near to $1500 whereas FCPX is only a fraction of that price (coming in at around $280). I believe that both FCP7 and FCPX has been developed for different audiences. X is aimed towards independent creatives or home film makers who need a little bit more power than iMovie currently offers whereas FCP7 offers full integration with different systems, full plugin support, compatibility with past versions of final cut and that vital viewer window!

Final Cut Pro X is a powerful piece of software for creative individuals or production companies on a budget. It has a wide range of features that are excellently presented and I believe that with a little bit of training FCP7 users could easily make the switch.

Interestingly Apple are still selling licenses for Final Cut Pro 7, I guess this is for companies who are waiting for FCPX to be patched a few times before they make the switch. It’s also going to be interesting to see the possibility of thunderbolt technology with this new 64bit software.

You can buy Final Cut Pro X from the Mac App Store here.