Desk clutter is one of those unfortunate facts of life that everybody has to learn to manage and cope with. Massive piles of invoices, receipts, and business cards can be overwhelming, and finding a good solution can be taxing. Fortunately, Neat has a great product that, at least for me, helped tremendously as I dealt with this daunting task. But does the NeatDesk for Mac truly deliver? Read on to find out my thoughts. 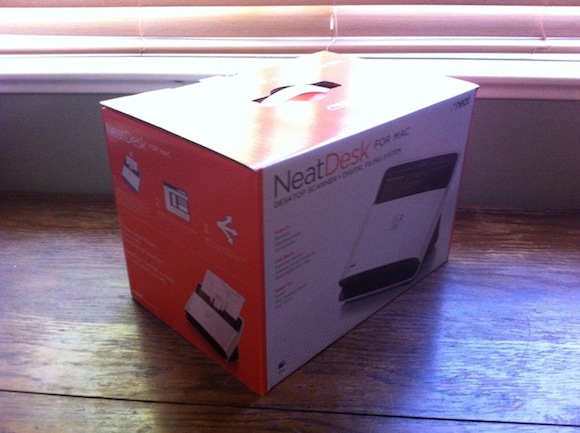 The NeatDesk for Mac ($399.95, Neat Co, Purchase) aims to provide a solution for managing your desk clutter by allowing you to quickly and efficiently digitize all of your receipts, documents, and even business cards, while the included NeatWorks for Mac software interprets the documents that you scan through it, as well as acting as a database to help you store and later recall your important papers.

The included NeatWorks for Mac software worked extremely well. It was able to read names, addresses, phone numbers and other data from my documents, and was even able to fairly accurately read and catalogue entire sentences found on large paper documents. 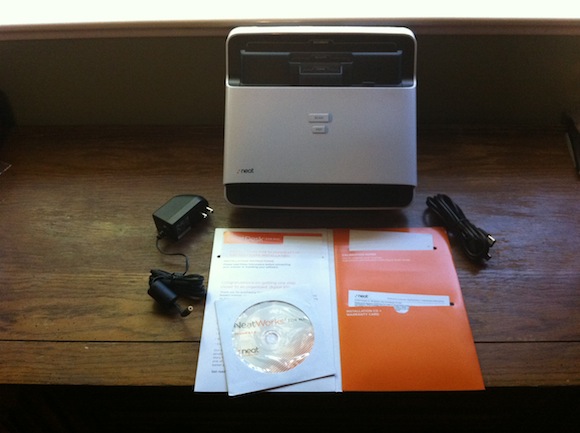 Straight out of the box, I was immediately impressed with both the appearance and durability of the NeatDesk. It’s very solidly constructed, made of high quality plastics that are not easily damaged, and has a solid heft – a good indication that it was built with quality.

I found the NeatDesk to be extremely easy to use – once it was set up, which takes only about 10-15 minutes, the only thing left to do is to feed all of your documents, receipts, and business cards through it, and then check to make sure that the NeatWorks software is properly reading and cataloguing your papers. The vast majority of the work is done automatically! 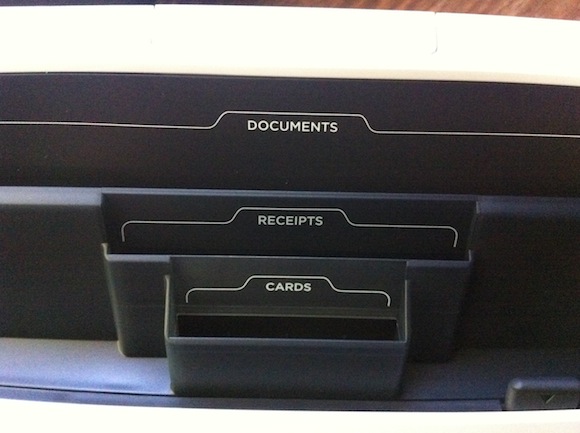 As far as aesthetics are concerned, the NeatDesk for Mac does not disappoint. It almost looks like something that Apple would design, with its rounded corners and obvious emphasis on style. I particularly love how the blue light on the front of the machine pulses in such an inviting manner.

In addition to the physical appearance of the product, however, the design of the NeatDesk for Mac also reflects that a great amount of careful thought and consideration went into its design – the device is smooth to use, and never feels cumbersome, or like it tries to get in your way.

The unit features a removable slot that lets you feed documents, receipts, and business cards through it all at the same time, and the front plastic panel folds down, revealing a ridge that catches your papers as they come through the scanner. When you’re finished scanning your papers, the entire thing folds back up into a stylish and compact shape that just happens to look great on your desk. 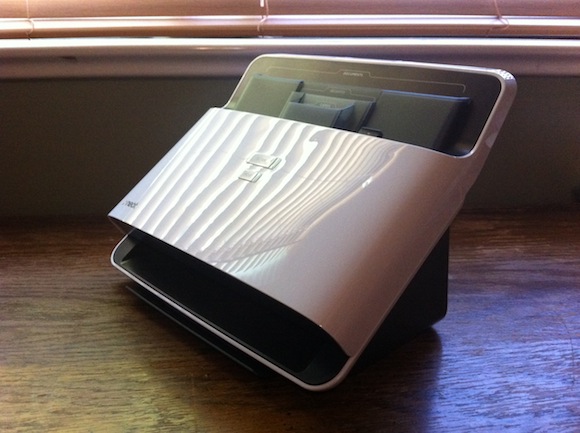 When I first received this unit, I swiftly unpacked it and proceeded to follow the directions to get it working on my Mac.  The setup procedure is very simple, and I was up in running in no time.  I scanned my first document – A grocery.  It looked great, and the built-in OCR detected all of the text, and automatically created a database entry using the total price, and the items purchased.

I then scanned a full-sized invoice – and achieved a similar result, with the only concern being that the scanner slightly cut the sides off of the document. This effect was lessened significantly when I fed the invoice through a second time, and when I fed an additional invoice through the NeatDesk, the scanner worked flawlessly, and did not cut anything off at all.

When working with various documents that use different fonts, the NeatDesk did make a few mistakes, skipping a word here or there and sometimes inputting the wrong word, but I found that as I continued to use the device, it was able to learn from the documents it had already processed in order to reduce the number of mistakes that it made. 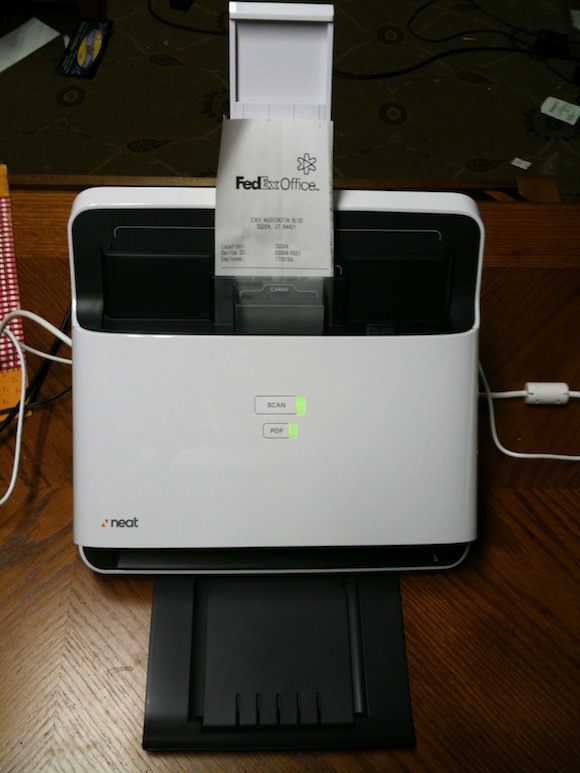 The included NeatWorks for Mac software is one of the most functional and complete hardware-bundled software solutions that I have ever used – it’s remarkably easy to use, works with scanners other than the NeatDesk (like the Fujitsu ScanSnap series), and is able to analyse, interpret, and convert your data into searchable and editable text quickly, efficiently, and with fewer mistakes than most OCR programs that I’ve used.

The design of the software is also compelling – both visually and functionally, NeatWorks for Mac is powerful, easy to use, and reliably got the job done every time, with very minimal intervention on my part. If I could describe NeatWorks using just one word, that word would be “polished.” 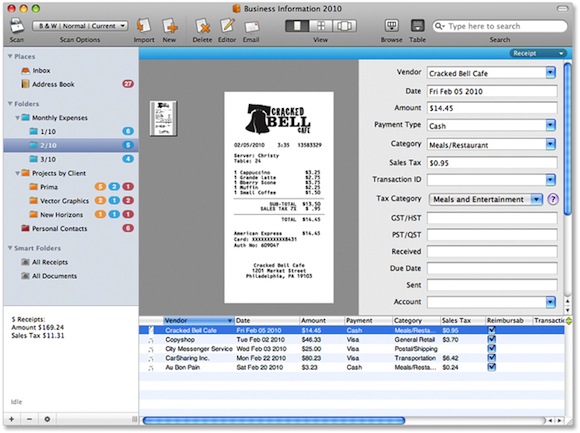 While the vast majority of my experiences with the NeatDesk for Mac were positive and rewarding, I did encounter a few points of concern. First, if NeatDesk for Mac isn’t already open on your Mac, hitting the scan button on the unit would occasionally launch Preview’s built-in scanning utility instead of opening NeatWorks for Mac. This only happened to me a few times, but did occur often enough to occasionally become annoying.

Second, while I appreciated the included paper insert that allowed me to feed receipts, documents, and business cards all at the same time through pre-sized slots, I was disappointed more than once that it wasn’t able to hold more – I was able to fit 12-15 documents, about as many receipts, and about 10-12 business cards into the holding slot all at once. This was fine after I’d already scanned everything into my library and was only using the NeatDesk for “maintenance,” but was frustrating when I was initially feeding all of my hundreds and hundreds of documents, receipts, and business cards through the machine for the first time.

Another concern that I had is that NeatDesk didn’t do a very good job of handling documents that contained columns, reading across the entire page when inputting my data into its database rather than reading column-by-column, however, in Neat’s defense, I’ve not yet seen any scanner software able to do this. Further, again as I somewhat expected, the NeatDesk occasionally had difficulty processing highly graphical business cards. 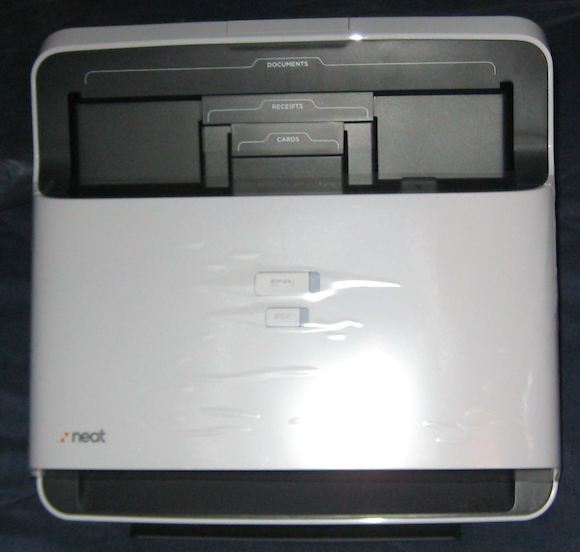 Overall, I was very impressed with both the NeatDesk for Mac and its included NeatWorks software, and found that, while it sometimes took a while for the software to “learn” how to most accurately process your documents, the machine performed extremely well once it was established.

The NeatDesk for Mac and its companion software stand as examples of excellent, easy to use, attractive and intelligently designed products that do their job as well as I’ve ever seen a solution do straight out of the box, and while I did run into a few minor snags, my overall experience with the NeatDesk for Mac was exceptionally positive. 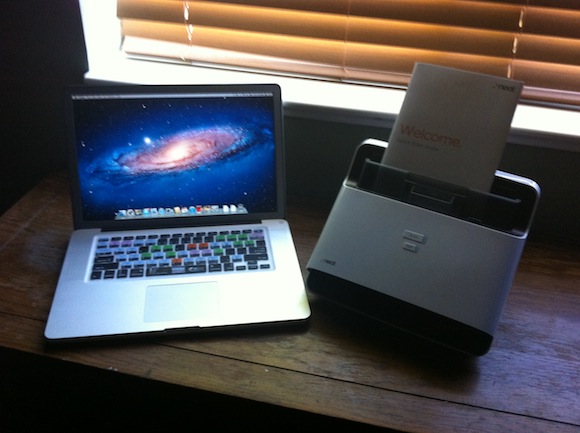 While the NeatDesk for Mac is certainly a well-designed, durable, and high-quality product, I was nevertheless slightly disappointed that it didn’t work perfectly with its software 100% of the time (occasionally launching the scanning utility included with OS X). Further, I occasionally found myself wishing it could hold more paper that it actually does, and I was quite disappointed at its lack of ability to handle documents with columns. Below, please find a list of the pros and cons that I encountered:

Taking all these things into account, I award the NeatDesk for Mac 4 out of 5 stars, because while it did excel at its task most of the time, there were just enough glitches and disappointments for me to occasionally become frustrated with the unit. I feel that I could strongly recommend the NeatDesk for Mac to most business-oriented consumers, or to anyone who need a little extra help to stay organized. For more information, or to purchase the NeatDesk for Mac ($399.95), visit Neat’s product page on the web.