Today, right on the heels of the announcement that Apple is now the fastest growing retailer in the US, TechCrunch reports that Microsoft, ever unoriginal, is preparing to take on Apple by introducing 75 new brick-and-mortar Microsoft stores within the next 2-3 years. The below map shows the locations in which they plan to build stores: 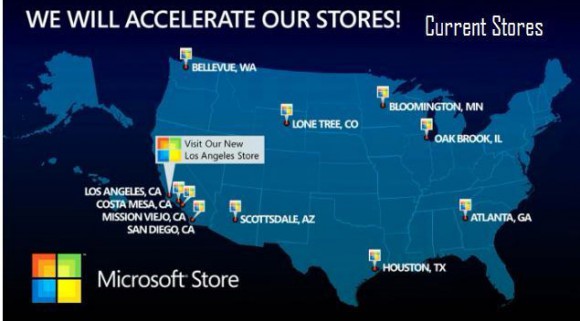 Microsoft has toyed with the idea of retail stores before, having planned and even built stores right next to Apple Retail Store locations, but it seems they are now done playing around. According to Microsoft CEO Kevin Turner, who explained Microsoft’s expansion plan to attendees of the Microsoft Worldwide Partner Conference:

The plan is to open an additional 75 retail brick & mortar locations over the next two to three years. That’s a massive uptick from the 11 Microsoft Stores opened over the last two years. Get ready. The Microsoft vs Apple battle is about to come to a mall near you.

While Microsoft makes a bold, unoriginal, and very expensive push into retail (which I suspect they may never fully recover from), the smart kids in the class realize that it almost certainly won’t be much of a battle.

Just like the current Microsoft stores, these outlets will feature more than just PCs. They’ll stock and display Xbox 360s, Window Phones, software and media players not named iPod. They might even break out in a little song and dance from time to time.

Aside from that, it’d be a truly horrifying site to see a dozen “Microsoft Gurus” all simultaneously trying to remove the latest performance-sucking malware from as many computers. The conversation over which of the three separate versions of Microsoft Office to install, or which of the 4 separate consumer versions of Windows 7 they have (or should purchase) is sure to be equally as nauseating.

Isn’t it about time that Microsoft faced the reality that a fancy building won’t have any impact on the quality of their product?