Many were disappointed when Mac OS X Lion and new Macs were not released today, as had been previously expected. Some tidbits from Mark Gurman’s Twitter account, however, suggest that Apple Retail Stores already have the new MacBook Airs in stock in sealed boxes, and that they were intended for release today. 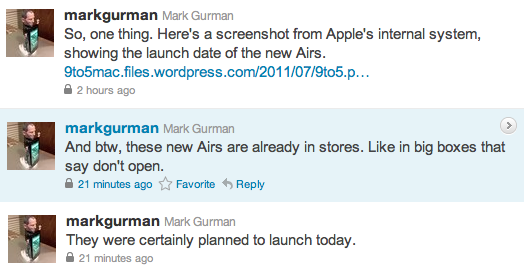 Gurman is known to be well-sourced in the Apple community, but if his suggestions are correct, it raises a serious question about why Apple would delay the release of the MacBook Airs. Are they awaiting another new product that hasn’t yet arrived, such as new Mac Minis? Or perhaps new Thunderbolt-enabled Apple Cinema Displays?

Of course, nobody outside Apple knows for sure, but at least this is one more thing you can dream about tonight and eagerly await until its arrival.