Apple’s stock opened at over $410 this morning, up more than 2% over the weekend, and having increased more than 7% since Steve Jobs’ resignation. Apple’s market cap has also now reached $380 billion, $25 billion ahead of Exxon Mobil, firmly placing Apple as the world’s most valuable company. 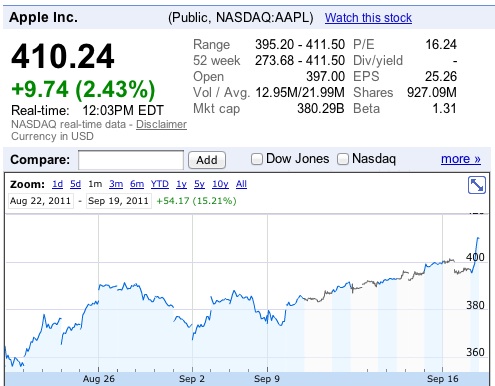 Apple recent stock performance stands as good evidence that the markets at large continue to have unprecedented faith in Apple as a company, and in Tim Cook as Steve Jobs’ successor as the CEO of Apple. Apple’s stock is now higher than it has ever been with Steve Jobs at the helm.