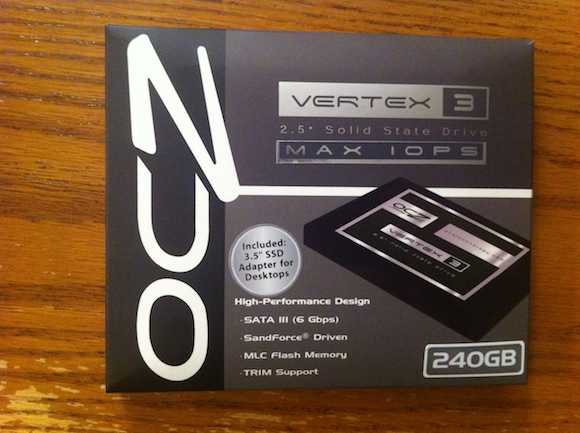 The OCZ Vertex 3 is a SATA 3-based consumer SSD, advertising read speeds of up to 550MB/s, and write speeds of up to 520 MB/s. While these drives lack the aluminum shaft of OWC’s Mercury line of drives, instead using a high-grade plastic, they nevertheless look and feel just as high quality and durable as OWC’s offerings.

As is traditional for me when I review an SSD, I kept a traditional hard drive in my test setup by removing my optical drive & using an optical drive HDD caddy (in this case OWC’s Data Doubler) for my 1TB HDD, which I use to store my iTunes library and other data that doesn’t depend on transfer speed. 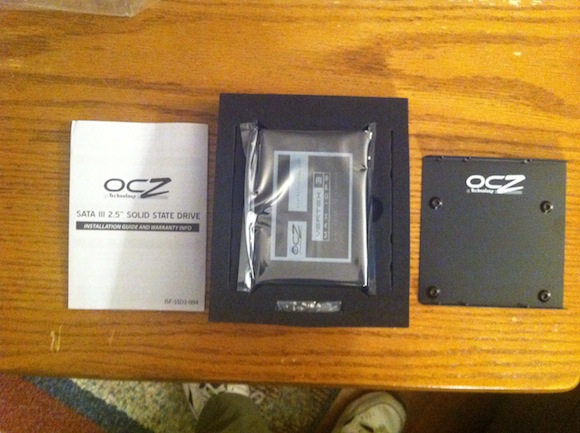 I installed the OCZ Vertex 3 in the main hard drive bay in my MacBook Pro, mainly because the primary SATA bay often has more reliable SATA 3 performance. Installing the SSD was a snap, and I was up and going in no time. I installed a base install of Mac OS X Lion on the drive, and installed only the applications I use for my various tests (Photoshop, Handbrake, etc).

To perform the benchmarks, I utilized multiple methods – first, so-called “common” benchmarks in which I used OS X to transfer files and time-test booting, video conversion and app loading scenarios. I then used a number of formal benchmark utilities, including DigLloydTools and BlackMagic Disk Speed Test (Free, App Store Link). All formal benchmarks were conducted on a second empty partition of the SSD apart from the main boot partition. 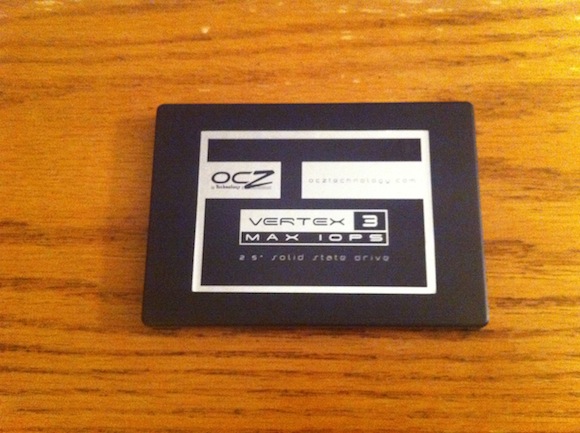 With the Vertex 3 installed, I was able to fully boot Photoshop CS5 in just 1.4 seconds, shaving a fraction of a second off the times I measured using OWC’s Mercury Extreme Pro 6G. The system boot test, in which I timed how long it took to launch a fresh install of OS X Lion from my MacBook Pro’s powered off state (with automatic log-in enabled), I was able to boot to the desktop and launch all startup services in 7.8 seconds, down slightly from the 9 seconds I achieved with the Extreme Pro 6G.

It is relevant, however, that the Extreme Pro 6G was tested using OS X Snow Leopard rather than OS X Lion. Next up was a video conversion test. In this test, I used HandBrake to convert the same MKV video file to MP4 as I did in my prior reviews, and was able to achieve a speed of 11 minutes & 6 seconds, as compared to 12 minutes (using the Mercury Extreme Pro 6G.)

Next, using BlackMagic’s DiskSpeedTest to perform a speed analysis, I was able to achieve max write speeds of 511.6MB/Sec and max read speeds of 534.3, similar to the results I achieved using DiskTester. 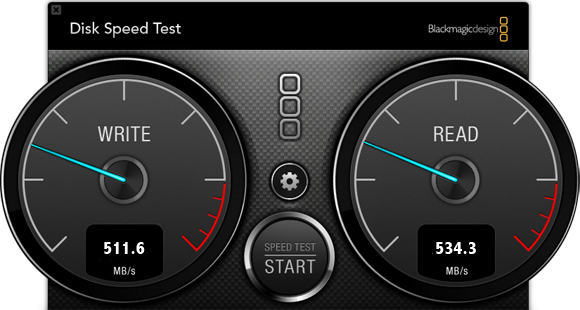 In everyday use, I admittedly noticed very little difference between the OCZ Vertex 3 and the OWC Mercury Extreme Pro 6G, although there were times that I noticed that the Vertex 3 felt a bit snappier, particularly when loading large programs or transferring files from one partition on the drive to another. Both drives performed particularly well, and while the Vertex 3 was a bit snappier in certain instances, the actual real-world performance difference between these two drives was largely negligible. 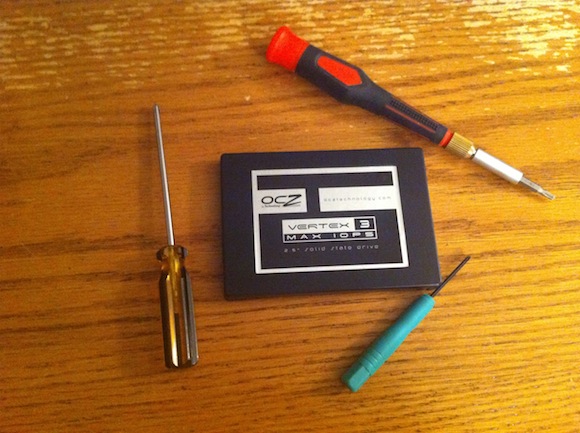 The construction of the Vertex 3 isn’t as heavy, lacking the milled aluminum shell of the Extreme Pro 6G, but the drive nevertheless felt sturdy and well-built, and considering that the drive isn’t likely to be subjected to physical stress, it’s not a remarkably relevant factor. 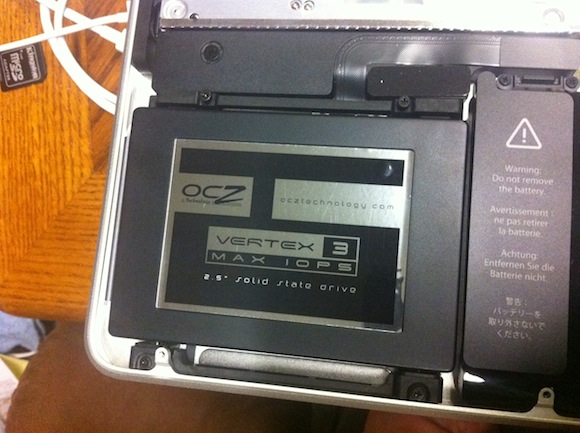 The pricing and warranty is where the main difference lies. The Mercury Extreme Pro 6G in a 240GB capacity has a retail price of $519.99, and comes with an industry-leading 5 year warranty. The Vertex 3, on the other hand, retails for $479.99 and includes a 3 year standard warranty.

Also of note is that OWC’s more budget-conscious Electra 6G drive in a 240GB capacity has a retail cost of 479.99, the same as the Vertex 3, and offering the same 3 year warranty. For the same dollar amount, the OCZ Vertex 3 offers significantly better performance than the Electra 6G for the same money.

In comparison to a traditional hard drive, SSD’s really do offer a tremendous boost in both speed and performance. The hard drive is usually the performance bottleneck in both machines, and with an SSD, you’re increasing its ability to move data by leaps and bounds. Booting a Mac under a fresh install of OS X took 47 seconds using a traditional 7200RPM hard drive.

With the OCZ Vertex 3, I was able to completely boot in just 7.8 seconds. Loading Photoshop CS5, which once took 12 seconds, was completed in a mere 1.4 seconds. Converting a standard movie from MKV to MP4 using Handbrake went from 34 minutes using a standard hard drive to just 11 minutes & 6 seconds using the Vertex 3. 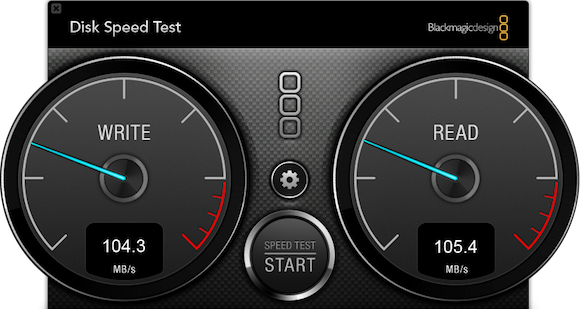 Make no mistake about it – installing an SSD in your Mac will provide a serious boost in performance, which makes sense considering that a traditional 7200RPM hard drive can operate at a max of around 105MB/Sec, whereas a SATA 2 SSD can operate at up to around 300MB/Sec, and the fastest SATA 3 SSD’s can operate at 550GB/s, nearly maxing out the 600GB/s maximum speed of SATA 3.

In the long run, considering the differences in performance, price, and available warranty, it’s difficult to say which is the better buy. If a longer warranty is worth the extra $40, and the slightly lesser performance won’t make a significant difference to you, the OWC Mercury Extreme Pro 6G may be the way to go.

All things considered, I regard it to be the best consumer value of the 3 drives, although those that really desire a 5-year warranty may opt for the OWC Mercury Extreme Pro 6G. 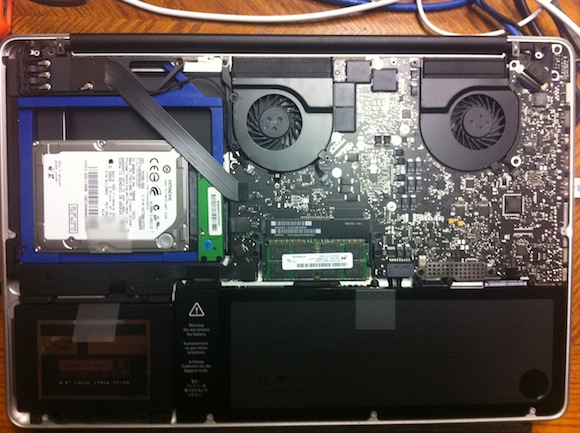 Considering the OCZ Vertex 3’s impressive real-world performance, benchmark results (The Vertex 3 is the fastest drive I have ever tested), solid value for the money, and overall high quality, I award the OCZ Vertex 3 a 4.5 out of 5. It meets every advertised expectation, performs exceptionally well, and provides a solid value for the money. I was a bit disappointed at its lack of a metal casing, however.

I consider the OCZ Vertex 3 to be the overall best consumer SSD that I have tested, and likely one of the very best drives on the market, and for that, I give it my highest recommendation. The Vertex 3 is a solid product that will serve any consumer well, and provide a much-desired speed boost over a traditional hard drive.

For more information on the Vertex 3, or to find a list of authorized retailers that offer OCZ drives, visit OCZ’s product page on the web. The cheapest listing I could find for the drive from an authorized retailer was $439.99 from Newegg.com. (Update: Now only $199)