I’ve used a number of alarm clock apps over the years, and have generally found very little to distinguish and set apart one alarm app from another. I was pleasantly surprised, however, when I tried out Stav & Tunji’s MyWakeUpTunes app ($0.99, App Store Link). MyWakeUpTunes is a unique alarm clock app with several features that set it apart from the crowd.

MyWakeUpTunes goes further than most alarm apps I have seen by acting as more than just a simple alarm clock, providing unique features such as downloading your local sunrise time from the web, and allowing you to not only choose which song you wake up to, but allowing you to specify details about how the song is played back in the morning as well. The app also allows you to purchase an inexpensive soundtrack through in app purchasing for $2.99, which is filled with a number of both soothing and awakening sounds that you can use as alarms.

Another way MyWakeUpTunes goes above and beyond other similar apps is by allowing you to specify exactly how it plays your wake-up music, and how gradually you’d like the volume to increase. I found that the app worked best for me if I set the app to begin playing music very softly and gradually increase the volume until I am awake. Stav & Tunji call this feature DURVIC, and explain it as follows: 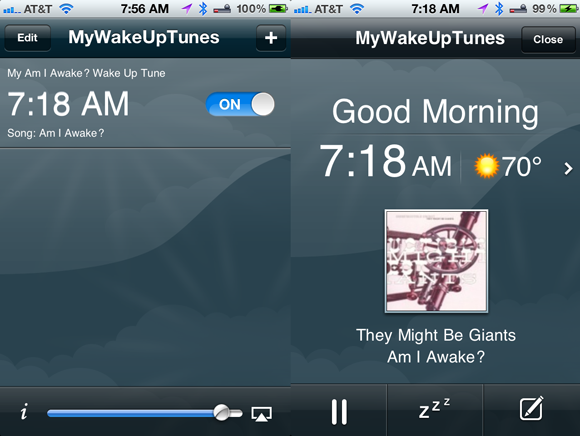 DURVIC: This stands for Duration and Volume Increase Control. It ensures you have the smoothest transition from sleep to wake. In addition, it gives you the flexibility to choose the portion of the song you want for any of your alarm times, to wake up to so you can skip the undesired parts. Now you can wake up to your favorite choruses, favorite verses and skip other parts of the song. It is a must have, particularly if you listen to Hip hop.

Another unique feature that I came to appreciate from this app is that it provides the option right within the app to post a message to Facebook, Twitter or Tumblr as soon as you’ve woken up, allowing you to start your day by expressing yourself to your various social networking friends and connections.

Some final niceties included with this app are that it displays the current weather conditions for your local area automatically when the alarm sounds, so you already know how the weather is (and how it’s expected to be) before you begin planning your day. Further, the fact that the alarms will sound from this app whether or not the app is running in the background is especially vital so you don’t accidentally sleep in by setting your phone to silent or closing the app. 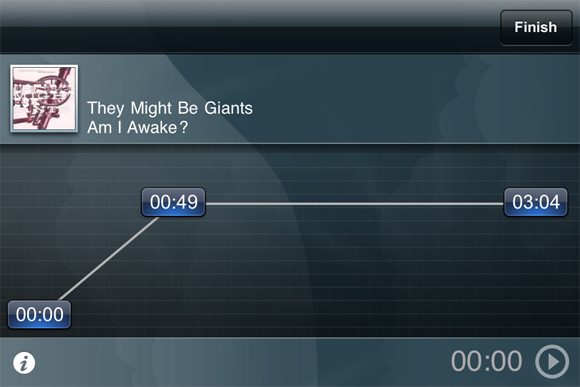 While using this app was overall a very positive experience, I did have occasional issues with the app crashing, particularly when switching between the various parts of the app or when selecting music from my iTunes library. These crashes were minimal, however, and considering this is a first-edition app from a new developer, the overall performance of the app was quite acceptable.

Despite the fact that the app was slightly buggy, I found the unique features of the app to be extremely useful, I found the interface to be unique and refreshing from what I’d seen in other alarm apps, and I found that the app did everything that it promised in an efficient and unfailing manner. If you’re willing to bear with the developer as this app evolves and become better and more stable over time, I’d highly recommend this app as a unique and compelling new take on the traditional alarm clock app.

MyWakeUpTunes’ unique features, overall great performance, compelling interface, and the fact that it works regardless of the state that your iPhone is in (unless you turn it off, in which case no alarm app can save you!) make it a worthwhile purchase, especially for the low asking price of just $0.99. 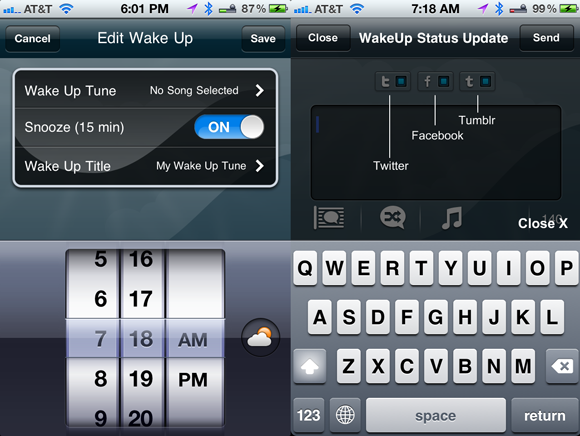 Even though the app did have a minor stability issue, I nevertheless award it a 4 out of 5, noting its strengths, the newness of the app and its developers, and leaving some room for improvement in future versions. Below are some of the pros and cons I encountered during the review:

For $0.99, I recommend this app to anyone looking for something more or something different in their alarm app. It’s a clever new app with some interesting new ideas that certainly has a lot of future potential. To learn more, or to download this app for just 99 cents, head on over to the iTunes App Store ($0.99, App Store Link).