Reddit user Sean Petykowski has put together a photo of an Apple Wireless Keyboard taken apart. The photo is beautiful in a surreal way, and gives a great insight into the complexity that goes into the beautiful accessories that Apple creates. 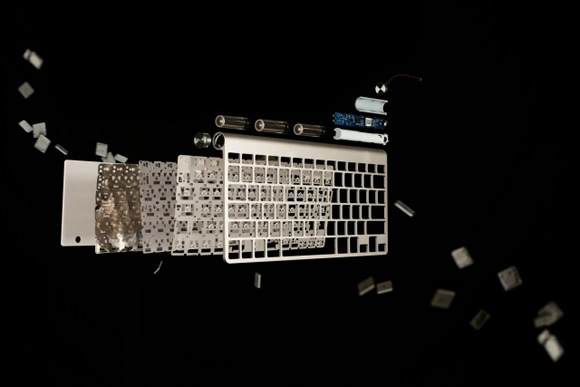 The photograph — which looks like a gadget supernova — isn’t just one shot, but a composite of fifteen separate images. Petykowski says that the dissassembly process involved removing all the keys off one-by-one, then popping the keyboard in the oven until the glue dissolved, at which point the rest of the keyboard could be pried apart.

Petykowski then hung the keyboard frame and all internal frame components, and took the first photo. He then removed all components except for the frame itself, then took individual parts, hung each one at the same angle and perspective as the frame, and took a photo of each. Petykowski says, “All this was achieved in a photo studio using fishing wire and two dowel rods on light stands with a black fabric background. This photo was lit using two square soft boxes.”

After all the images were created, they were imported to Lightroom, corrected for white balance, lens distortion and general exposure issues. Then it was opened in Photoshop and then had the fishing line removed.

Don’t mourn the passing of a serviceable keyboard in the name of art, Petykowski says the keyboard he used had been water damaged, so it was already non-operational.