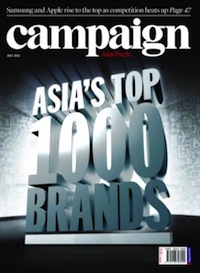 Apple’s explosive global growth is pretty remarkable, and it has now earned them among the most popular brands throughout the entire Asia region, topping huge brands like Nestle, Sony, and Panasonic!

As part of Campaign Asia Pacific’s annual ranking of the top 1,000 brands for the Asia region (as reported by CNBC, via AppleInsider), Apple was ranked as the second most influential company in the region, bested only by Samsung, who has a much larger physical presence in the region (as well as a much broader selection of offerings, including home appliances, televisions, and more).

Considering Apple’s increasing effort to gain ground in Asia, it will be interesting to see where these numbers rest a year from now. Still, being the second most influential brand in all of Asia is nothing to sneeze at!