You know I loves me some Kickstarter projects, and that I have a near fetish for iPhone cases. Here’s a Kickstarter that brings the best of both worlds together. The FLASHr Case, a protective case for your iPhone 4 or 4S, lights up when you receive an email or other notification.

The FLASHr contains a unique reflective layer that covers the top and sides of your iPhone, and your Apple logo. When LED alerts are activated, every time you receive an alert your LED will flash, then the reflective layer inside the FLASHr creates a pulsating glow. 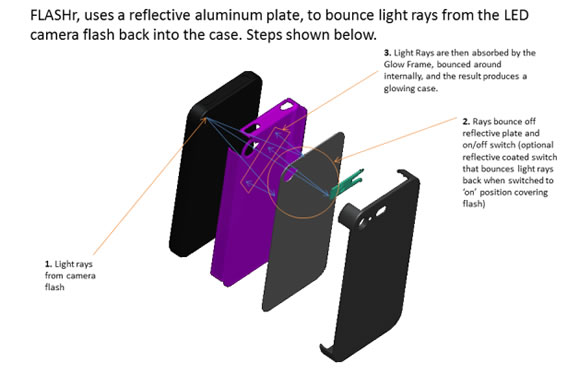 This looks pretty freaking cool, it’s available in multiple colors, and the company claims there will be no negative effect on any flash photos you take while your device is wearing the case.

Pledges levels start at $1, but right now anyone that pledges $35 or more gets the opportunity to create their own custom color combo from the FLASHr color charts.

This is a worthwhile project, if for nothing else than it’s just so farging cool. The project is not as yet fully funded, so get your pledging butts over to the website and check it out.