After Apple pulling, and then returning, its products to the EPEAT green certified list, comes the news that all of Apple’s laptop models, including the MacBook Pro with Retina Display, have been awarded with EPEAT’s gold rating. Or did Apple just go ahead and give themselves that rating? 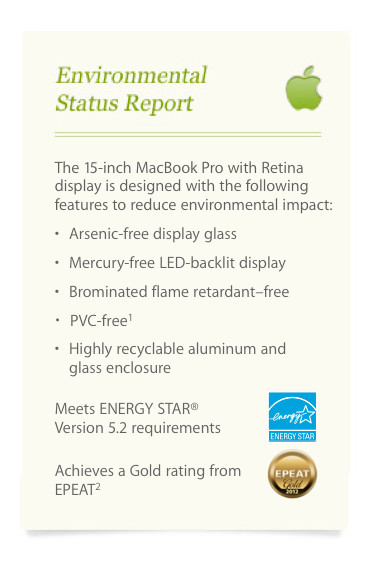 First, we had a report from electronista, saying all of Apple’s laptop models had been awarded the EPEAT “gold” rating. The article said, “Interestingly, even the Retina MBP gets full points for “Product longevity/life cycle extension,” an acknowledgement (perhaps) that the company’s use of custom batteries and the new fused display is likely (though there will still be exceptions) to decrease the likelihood of defect, which may offset the new machines’ lack of easy interior repair.”

Numerous government officials probably most notably the mayor of San Francisco have greeted the news of Apple’s return to EPEAT certification warmly, which I guess means that San Francisco, the federal government, and other “environmentally concerned” parties can go back to putting Apple products on the “buy” list. Happy, happy, joy, joy!

But wait a minute. Apple hasn’t changed a damn thing about the way they make their laptops. All they did was just put them back on the EPEAT list. But you’re thinking to yourself, “Self, now that they have that gold rating thingee on their listing, the skies are gonna clear up, and the water will run pure, and the landfills will no longer be poisoned, right?” Not so fast green believer!

The Loop has an interesting note from Fortune, where Barbara Kyle, the ETBC’s National Coordinator said:

“It’s important to understand that the manufacturers grade themselves against the EPEAT criteria first, and then EPEAT conducts a review of this grading. That EPEAT review has not yet occurred. They can require the manufacturers to remove any product from the registry if it is not found to conform to the IEEE standard.”

Kyle says issues with criteria for EPEAT’s “Design for End of Life” may prohibit the use of glue to attach the battery to the casing as has been seen on the Retina MacBook Pro.

So, Apple put themselves back on the list, and went ahead and stuck that gold star on their laptops themselves? But… Isn’t that a little, I don’t know, wrong?

Apparently not, look at her statement,  “They can require the manufacturers to remove any product from the registry if it is not found to conform to the IEEE standard.” So, if it doesn’t meet the requirements, with say, batteries that are glued into place, it’ll be taken from the list, right? Guess we’ll see.

Seems a little wrong to me that an organization like EPEAT would just say to a manufacturer, “Go ahead and put your product on our approved list, give it a gold star if you think it deserves one. Then we’ll check your product and if it turns out it’s not quite as environmentally safe as you say it is, we’ll take it off the list.” Isn’t that like a 3rd grade teacher telling the class, “Go ahead and grade your math test yourself. Give yourself an A if you’d like, I’ll get around to checking them sometime soon…”

EPEAT has issued a statement welcoming the prodigal Apple back to the fold, and said that it “looks forward to Apple’s strong and creative thoughts on ongoing standards development.” Is this another way of saying, “Tell us how you want this to look, and we’ll mold it that way?”

EPEAT CEO Robert Frisbee wrote that EPEAT, “must reward new directions for both design and sustainability, simultaneously supporting the environment and the market for all manufacturers’ … high-performance products.”

It sounds like Frisbee is bowing to Apple a bit when he says that it’s “critical” that the organization support “timely standards development … and the current refresh of the PC/Display standard.”

So, if Apple does it, it must be the right way to do it? This will be an interesting list to keep our eye on, we’ll also be monitoring any changes to the EPEAT standards. Good for the environment, or good for Apple?