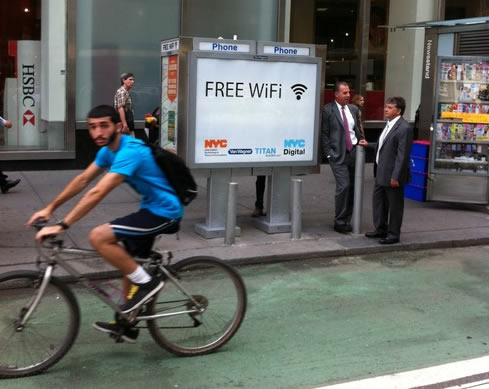 The government program aims to convert a number of derelict, unused or otherwise obsolete pay phones dotting the city into useful Wi-Fi hotspots and has started operations in Manhattan, Queens and Brooklyn with more planned for the Bronx and Staten Island, reports the Los Angeles Times.

“We are taking an existing infrastructure and leveraging it up to provide more access to information,” Rahul Merchant, the city’s chief information officer, told the Associated Press.

As cell phones saturated the populace, New York City’s 12,000 pay phone kiosks go largely unused. To make use of the kiosks, telcom operators have joined with the city to divert funds toward Wi-Fi conversions for the locations, which cost approximately $2,000 per installation.

Residents will be able to take advantage of the free Wi-Fi access 24 hours a day with no charge. The range of the wireless routers is limited to just a few feet.

The active locations are: